The fifth set of Bowl Championship Series standings were released on Sunday night, and fans of Kansas State and Oregon have to be excited that the Wildcats and the Ducks occupy the top two spots in the newest rankings.

With Alabama’s loss to Texas A&M, Bill Snyder’s squad claimed the top spot following its win over TCU. Meanwhile, the Ducks are No. 2 after defeating Cal on the road. Kansas State and Oregon would play for the BCS national championship if the season ended today.

Fellow unbeaten Notre Dame is on the outside looking in right now, and the Fighting Irish will not move up in the rankings unless one of the top two teams loses. 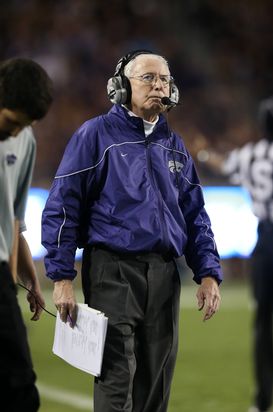 US PRESSWIREBill Snyder and the Wildcats occupy the top spot in the newest BCS standings.

• Obviously the Texas defense has been disappointing all season long. But the Longhorns have played better the last couple of weeks, and keep in mind that Manny Diaz's game plan shut down the Wildcats offense last year. Granted, it's a different unit this fall. But maybe the Longhorns have one shutdown game in them this season. Notre Dame fans certainly are hoping that the Longhorns can knock off the Wildcats and help move the Fighting Irish up the standings — assuming the Irish can beat USC in Los Angeles, of course.

• Keep an eye on Texas A&M. The Aggies would be an attractive option as an at-large berth for the Fiesta Bowl because they will have a good resume and a potential Heisman Trophy finalist in quarterback Johnny Manziel. In my newest BCS projections, though, I still have LSU getting that at-large spot.

• Six of the top nine spots in the new rankings are occupied by the SEC — the first time any conference has ever pulled that off. And yet the league's streak of six straight national titles is in doubt.

• Could a potential Alabama-Georgia SEC title game be a default national semifinal? That possibility exists if Notre Dame falls to USC and either Kansas State or Oregon loses. The Tide or the Bulldogs could still sneak into the national title game with one loss in such a scenario.

• It will be tough for Louisiana Tech to snag a BCS at-large berth. The Bulldogs look like they won't crack the Top 16 of the final BCS standings, and I don't think they would finish ahead of a Big East or Big Ten champion.