It's only December 7 so we'll have an entire month to analyze and dissect the BCS national championship game between LSU and Alabama in New Orleans on January 9.

In the meantime, let's take a look back at the November 5 matchup between the Tigers and Crimson Tide that took place in Tuscaloosa and how Les Miles was able to snag yet another win against Nick Saban.

It would be an understatement to say that Alabama played horribly on special teams in its first meeting with LSU. The Crimson Tide missed four field goals, including three in the first half when the Tigers were able to stay in the game despite being outplayed. 'Bama kicker Cade Foster was wide right from 44 and 50 yards in the first quarter before Saban turned to Jeremy Shelley, whose 49-yard try was blocked by LSU defender Bennie Logan. Shelley opened the scoring by connecting from 34 yards out in the second quarter and Foster hit from 46 yards in the third, but poor special teams struck again when Foster failed to connect on a 52-yard attempt on the Tide's first and only possession in overtime. After Michael Ford's dash around left end, kicker Drew Alleman's 25-yarder in the extra period gave the Tigers the win. Unquestionably, special teams played a large role in Alabama's defeat.

Meanwhile, with the exception of a shanked 22-yard punt to open the second half, LSU punter Brad Wing had his usual strong game. His best moment came late in the fourth quarter when he booted a 72-yarder that was helped by Marquis Maze's decision not to field the punt. It rolled down the field and the Tide gave away what would have been very good field position. Although, based on the way their kickers struggled, perhaps they would have missed a potential game-winning field goal even before overtime. 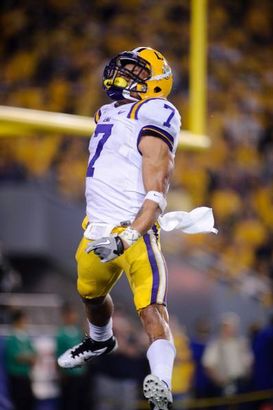 One last note: Keep in mind the impact that LSU's Tyrann Mathieu has had all season, specifically on special teams the last two weeks against Arkansas and Georgia. The Honey Badger returned a punt 92 yards for a game-tying and game-changing score against the Razorbacks, and he followed that up with a 62-yard return for a touchdown against the Bulldogs when the Tigers looked lifeless on offense. Will he receive the Devin Hester treatment in the rematch -- directional punting by the Tide to avoid a big return?

Jordan Jefferson took a step back last week in the SEC Championship game against Georgia, completing only 5 of 13 passes for 30 yards and a score after three strong efforts as the starter after the first meeting with the Tide. While the entire Tigers offense struggled in the first half against the Bulldogs, Jefferson's subpar play stood out. We have seen Miles employ the two-quarterback system for the last few years, and I don't expect him to hesitate to go to Lee in this one. In fact, expect Lee to get plenty of practice reps leading up to this contest because the Mad Hatter likely knows he'll need both of his quarterbacks to beat the Tide again.

The last time we saw Lee taking meaningful snaps was in the first contest against the Tide, and it wasn't pretty. He threw two interceptions, though they were just his second and third picks of the year. Miles elected to go with Jefferson for the rest of the game, and Lee has essentially been an afterthought since. But we have to keep in mind that the Tigers likely wouldn't be undefeated without Lee, who stepped in admirably for Jefferson when he was on suspension. Against this Tide defense, no matter how well Kenny Hilliard, Alfred Blue and Co. are running the football, a one-dimensional attack will not get it done the second time around.

When the Tide dialed up a trick play -- a Maze pass in the red zone that resulted in Eric Reid's interception near the goal line -- it may have been the biggest indictment of quarterback A.J. McCarron. While he has become more comfortable in the offense, does Saban and offensive coordinator Jim McElwain have enough confidence in the sophomore to get the job done through the air in New Orleans? Because as good as Heisman Trophy finalist Trent Richardson is on the ground, the Tide will need to have some semblance of a passing attack against coordinator John Chavis' defense. While Richardson was shockingly wide open on a few passing plays out of the backfield in the first meeting, 'Bama will need Maze, Darius Hanks and Kenny Bell to get separation from the Tigers' defensive backs, who comprise the deepest secondary in the nation. McElwain will want to dial up some quick throws for his QB, but McCarron will need to make good decisions such as not taking a sack on third down in overtime -- a play that cost the Tide valuable field position and led to the missed field goal.

Again, we'll have a whole month to discuss this matchup. But what are your initial thoughts regarding this rematch?