The bowl season kicked off this past Saturday with a tripleheader of action. But Louisville opens the postseason for BCS-conference teams on Tuesday night when Charlie Strong’s squad battles Southern Miss in the Beef ‘O’ Brady’s Bowl in St. Petersburg.

Here’s a closer look at the Cardinals and Golden Eagles. 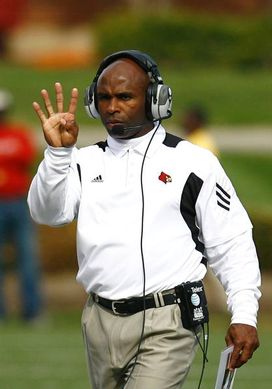 ICONCharlie Strong has Louisville bowling in his first season on the job.

Louisville (6-6, 3-4 Big East): The Cardinals were horrible in 2009, and their poor defense was the biggest reason why they finished 4-8 and fired Steve Kragthorpe. We knew that bringing in former Florida defensive coordinator Strong was going to pay big dividends. But this early in the rebuilding process? Behind an aggressive and much-improved defense, Strong delivered a bowl berth in his first season — the program’s first since the 2006 season. Offensively, Bilal Powell paces a strong rushing attack that could be poised to take advantage of a Golden Eagles defense that looked very vulnerable down the stretch this season. However, their defensive line is the strength of the unit, ranking No. 13 nationally in rushing defense mostly because of run stuffers John Henderson and Anthony Gray up front.

This is a Louisville team that upset Big East champion and Fiesta Bowl-bound Connecticut, and it did so with a senior class that refused to go through another rocky season. With young defenders like defensive linemen Brandon Dunn and B.J. Butler, along with defensive back Hakeem Smith, the future is bright for Strong’s group. Oh, and there’s also the recruiting coup that Strong pulled off over the weekend.

Southern Miss (8-4, 5-3 C-USA): The Golden Eagles rank 15th in the FBS in both scoring offense at 37 points per game and total offense at 458 yards per game. Led by veteran quarterback Austin Davis, Southern Miss runs a no-huddle attack — similar to the scheme Louisville had trouble with in its 35-27 loss to Cincinnati. So this will be a big test for the Cardinals secondary, one that played much better after allowing a season-high 275 passing yards and three touchdowns of 30 or more yards to the Bearcats. Since that loss, they have yet to allow a touchdown pass in the red zone — a span of six games. Southern Miss, which suffered a 50-49 double overtime loss at UAB that cost the squad the C-USA West division title, likes to run a lot of screens to its running backs and wide receivers. So defenders must be lined up on time and in the right spot. The Golden Eagles are also a very balanced offense under head coach Larry Fedora, a former offensive coordinator at Florida.

Like Boise State and Utah on Sunday, these teams nearly had a physical confrontation this week in a dance-off contest that was part of a beach-side event — one of the many activities that was part of their bowl week.

Louisville is excited to be in St. Pete, especially its seniors. I think Strong’s defense does just enough against the efficient Southern Miss offense, and Powell is too good behind a veteran offensive line to contain for four quarters. Plus, senior quarterbacks Adam Froman and Justin Burke should make enough plays against a Golden Eagles’ defense that ranks 103rd nationally against the pass.