Let's take a look at some of the most important aspects of this matchup between the Knights and the Cardinals.

• The explosive Cardinals: Ball State, which enters this matchup on a six-game winning streak under head coach Pete Lembo, has three All-MAC first-team selections in wide receivers Willie Snead and Jamill Smith and tight end Zane Fakes. Quarterback Keith Wenning, who missed the Cardinals’ regular-season finale after having surgery on his fractured right ankle, has been the beneficiary of having so many offensive weapons. The Cardinals hope the junior is healthy enough to play. If he isn’t, backup Kelly Page could get the start, although he was banged-up the last time he saw the field as well. In a worst-case scenario in which freshman Kyle Kamman has to make the start, Ball State will lean on its ground attack, which averages nearly 215.0 yards per game. If Wenning is able to play, though, he is capable of putting up big numbers. Just think back to his 445-yard, five-touchdown effort in a two-point loss to Kent State. However, he has also struggled with interceptions. Ball State, though, has a balanced offensive attack. Running back Jahwan Edwards ran for 1,321 yards and 14 touchdowns in 2012, and he should be able to find running lanes against a rushing defense that has allowed an average of over 160 yards per game on the ground. But while UCF is susceptible on the ground, the Knights do have the 29th-ranked overall defense, so Ball State could struggle to make some plays through the air. 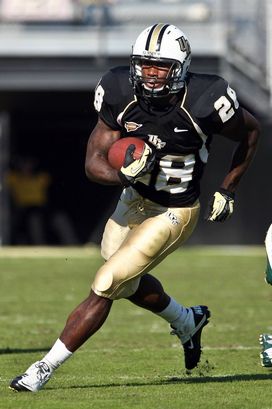 US PRESSWIRELatavius Murray has rushed for 1,035 yards and 14 touchdowns this season.

• Equally offensive Knights: UCF is a similarly high-scoring team as Ball State, with the Knights averaging over 35 points per game. They are led by Blake Bortles, who passed for 2,787 yards and 22 touchdowns against seven interceptions this fall. The sophomore added seven scores on the ground and tossed just two interceptions in his past 10 games. Meanwhile, senior running back Latavius Murray has given the Knights a solid ground option, too, rushing for 1,035 yards and 14 scores this season. The burly Murray, though, has failed to reach 100 yards in the last three games. However, the Knights have very good backfield depth. No matter how UCF moves the ball, the offense should be able to take advantage of a Cardinals defense that ranks 104th in the nation, allowing 460 yards per game. And keep an eye on the Knights’ play-action game. UCF has depth at receiver, led by J.J. Worton and Quincy McDuffie, and the Ball State secondary will surrender the big play. A lack of a consistent pass rush doesn’t help matters for the Cardinals.

• Intangibles: Ball State's postseason history isn't exactly sterling, as the Cardinals are 0-5 in bowl games. And last season, Ball State was one of two bowl-eligible teams that didn't get an invitation to a postseason game. But with a six-game winning streak, the excitement of making the postseason after last year's snub and with UCF coming off of the C-USA title game loss, Ball State may have the mental edge. Oh, and there's also the little thing known as MACtion working in the Cardinals' favor. However, UCF kick returner Quincy McDuffie could be an X-Factor. He's a speedster who has six career return touchdowns, including three this season and two in a game against Marshall. He led the nation in average kickoff return at more than 34 yards per attempt. In addition, UCF has near-home field advantage as St. Petersburg is just 125 miles from UCF's Orlando campus. UCF also ranks eighth in the nation in fewest penalties per game.