BYU hosts Houston in its home opener on Thursday night (9:00 p.m. ET, ESPN) in a game that has both Heisman Trophy and College Football Playoff implications.

Yes, two Group of Five schools are playing an early season showcase contest with a lot on the line. 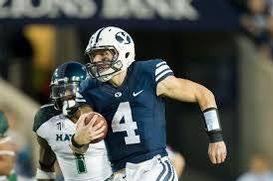 Taysom Hill and BYU look to move to 3-0 on Thursday night.

While we are only entering Week 3 and it's way too early to project most anything, BYU's win over Texas last week allowed the Cougars to perhaps (at least in the back of their minds) consider postseason possibilities outside of the Miami Beach Bowl. And with his early strong play, quarterback Taysom Hill's name needs to be mentioned in early season Heisman Trophy rankings.

One week after the junior dual-threat signal-caller threw three touchdown passes on 28-of-36 passing and ran for two scores in a 35-10 road win at UConn, Hill ran for three more touchdowns — including a highlight-reel 30-yard score after hurdling a defender near the goal line — and passed for 181 more in a 41-7 win at Texas last Saturday night.

Up next for Bronco Mendenhall's squad is Houston, a team that I projected in the preseason to represent the Group of Five in its automatic 'New Year's Six' bowl slot this year. But UH was stunned in its opener against a very good UTSA team before beating Grambling State last week. Tony Levine's squad will look to show that its prolific offense and big-play defense from last season are primed to put its Week 1 performance behind with a strong showing in Provo and stay in contention for a New Year's Six bowl berth despite the slip-up in the opening week.

BYU, meanwhile, has an outside chance at more than a New Year's Six bowl slot. While running the table would certainly be difficult considering there are still road tests against UCF, Boise State and Cal in addition to home tilts against Virginia and Utah State, a 12-0 Cougars squad would very likely get the automatic spot in either the Cotton, Fiesta or Peach Bowl. And, while it's difficult to envision, BYU would at least deserve some chatter for a spot in the inaugural College Football Playoff. Difficult to pull off even being undefeated, sure. But there's a lot of football left, and things in the college world often get weird.

If BYU has even one loss, however, the Cougars could be destined for the Miami Beach Bowl, as they are contracted to that spot if not in New Year's Six consideration.

So Hill, who ran for more than 1,300 yards and passed for just under 3,000 last year, and the Cougars have a chance to remain on the national radar with a victory Thursday night over a Houston team that is much better than it showed in its opening loss.

There are still plenty of questions as to how the College Football Playoff selection committee will comprise its final Top 25, but there's no question that BYU and Hill have a chance to present themselves as the ultimate wild card when all is said and done — both on a team and an individual level.