The 2012-13 college football postseason continues Thursday as Cincinnati and Duke collide in the Belk Bowl.

Let's take a glance at this matchup between the Bearcats and the Blue Devils.

This postseason matchup will be yet another with an interim head coach in charge, as Cincinnati lost Butch Jones to Tennessee and subsequently hired Tommy Tuberville away from Texas Tech. Of course, Tuberville won't coach the Bearcats against the Blue Devils, as defensive line coach Steve Stripling has received the interim tag. Stripling has been part of a defensive staff that helped the Bearcats allow just 17.2 points per game, which was the program's best mark in 31 years. The unit was at its best in November, as the Bearcats held their final four opponents to an average of less than 12 points per game, which helped Jones and Co. claim a part of the Big East title. It also helped Jones land the job with the Vols. 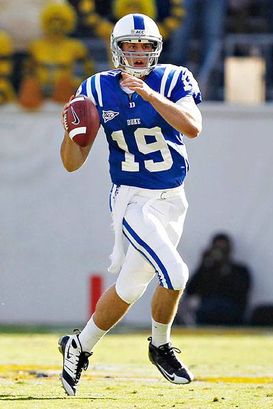 US PRESSWIRESean Renfree tossed a career-low eight interceptions this fall.

Meanwhile, Duke enters this matchup on a four-game losing streak, yet the Blue Devils are still in the postseason for the first time since 1994. ACC coach of the year David Cutcliffe had his team off to a 6-2 start and ultimately earned a contract extension. While the end of the regular season was bittersweet, Cutcliffe finally showed that he is capable of taking this program to a minor bowl game. Fans will now expect more than just one postseason appearance, and that remains a viable possibility as long as the Blue Devils maintain a consistently strong offense moving forward with skill players similar to seniors Sean Renfree and Conner Vernon. Renfree, a third-year starting quarterback, is coming off of a 432-yard, four-touchdown effort in the regular-season finale and had a career-low eight interceptions this fall. His favorite target has been Vernon, who holds the ACC records for career receptions (273) and career receiving yards (3,630). And he needs just 45 yards in this one to reach the 1,000-yard receiving mark for the first time in his career.

The Blue Devils averaged over 30 points per game this season, but they will be going up against a very sound defensive Bearcats squad. Meanwhile, Cincinnati's offense really started to get going after Brendon Kay took over for Munchie Legaux at quarterback. Kay won three of four games as a starter, completing nearly 62 percent of his passes and being a true threat on the ground as well. And the Bearcats should have no problem moving the football against a depleted Duke defense that allowed an average of nearly 50 points and nearly 600 yards per game during its closing four-game skid. Kay should be able to expose a thin secondary, while running back George Winn should be able to have success against a run defense that allowed nearly 300 rushing yards per game during the four-game skid. Winn rushed for 1,204 yards and 12 touchdowns on the ground this fall.