The 2011-12 bowl season continues Tuesday night with the Belk Bowl between North Carolina State and Louisville.

The Wolfpack and the Cardinals will meet for the fourth time in history, with Louisville winning all three previous matchups, including a 19-10 victory in their last meeting in 2007.

The Wolfpack, who will have home-field advantage in Charlotte, have shown their grit this season when they easily could have packed it in and sent head coach Tom O'Brien home with a pink slip. Instead, N.C. State will be making its third bowl appearance in four seasons under O’Brien despite its inconsistency this fall. A fifth straight win over rival North Carolina was followed up by a bad loss to Boston College, but the team rebounded nicely in a mauling of Clemson before coming back from a 27-point deficit to Maryland late in the third quarter to become bowl eligible in one of the biggest comebacks in school history. This will be the second time the Wolfpack will be playing in Charlotte for a bowl game, as they defeated South Florida in the 2005 Meineke Car Care Bowl. 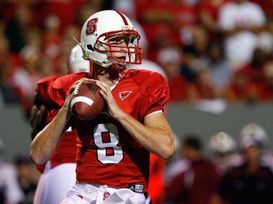 Mike Glennon tossed 28 touchdown passes this fall, the second-best mark in the ACC.

Redshirt junior quarterback Mike Glennon threw 28 touchdown passes, the second-best mark in the ACC, this fall to lead the N.C. State offense. In his first full year as a starter, he finished strong after a rough patch in late October and early November, throwing eight touchdown passes against just two interceptions in his last three games while completing at least 65 percent of his passes in each contest. But this offense will face a defensive line that, while crippled by injuries, has grown up and thrived with its youth. Can the Wolfpack put together enough of a rushing attack? The pressure has been on Glennon throughout the fall to carry the load because the rushing offense ranks 107th nationally.

Louisville, meanwhile, enters this contest having won five of its last six contests. Since Shawn Watson has taken over play-calling duties, the offense has been productive and balanced, playing well enough to help out a defense that ranks No. 10 nationally in rushing defense, No. 14 in scoring defense and No. 23 in total defense. Quarterback Teddy Bridgewater continued to look much more comfortable in the offense as his true freshman season progressed, breaking the school record for passing yards by a freshman, completing 66 percent of his passes and throwing 12 touchdowns against nine interceptions. This offense doesn't put up huge numbers through the air, but Bridgewater completed better than 60 percent of his passes in eight of his nine starts. However, he'll face a Wolfpack defense that led the nation with 24 interceptions, anchored by cornerback David Amerson's nation-leading 11 picks.

The Cardinals bounced back from home losses to FIU and Marshall and a 2-4 start to claim a share of their first Big East title since 2006. Their closing stretch included a 38-35 win at West Virginia, a feat even more impressive when you consider that the Cardinals start six freshmen on offense, including four true freshmen. And former quarterback Dominique Brown has combined with Victor Anderson to give the team enough of a rushing attack behind a vastly improved offensive line. Because of the impressive in-season improvement, Charlie Strong was able to notch back-to-back bowl appearances and get a contract extension as well.

Keep an eye on: Turnovers. It can be said that the turnover battle is critical in any game, but it definitely can be applied to this contest because N.C. State is 7-0 in games when it has forced three or more turnovers. In terms of players, Louisville receiver DeVante Parker has only 17 receptions on the year, but six went for a touchdown. He’s averaging 16.2 yards per catch, and a big play could be the difference in what should be a close game.