Penn State's transition to a new offense in Bill O'Brien's first season became drastically more difficult with the losses of running back Silas Redd and wide receiver Justin Brown to USC and Oklahoma, respectively. Whether it's Matt McGloin or Paul Jones at quarterback, the Nittany Lions have lost their two top offensive playmakers. 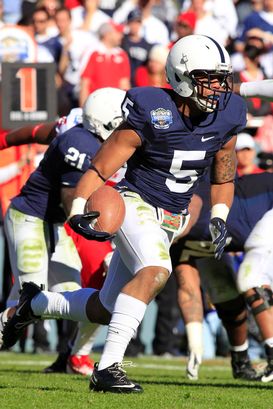 US PRESSWIREBill Belton has the chance to assume the starting RB job at Penn State.

But athletic Bill Belton has started to develop nicely at running back after many believed he was slotted to remain a receiver at the college level. O'Brien told Mike Kern of the Philadelphia Daily News that he knew all along Belton's future was in the backfield.

"Running backs have a certain look to them," O'Brien said. "They're muscular, they're built kind of low to the ground. We noticed that right away. So it was kind of a body type. And then, he went with the receivers and I said, 'Where you going?' And he said, 'Well, I'm a receiver.' No, you're a running back."

Belton is currently the No. 1 running back in State College after serving as the Wildcat quarterback last season and playing receiver. He is used to having the ball in his hands, running for over 1,000 yards while passing for more than 2,000 in his last two prep seasons.

The 5-10, 202-pound South Jersey native has added weight, which is important because of his impending increased workload. He had just 13 carries for 65 yards as a freshman in 2011.

While he has a long way to go to reach Redd's star status, he's well on his way to at least getting the chance to prove that he's more than just an "athlete" who just happens to play football.