With spring practices in the books, I continue to run down my post-spring conference power rankings. Let’s take a look at how things shape up in the Big 12.

And be sure to check back with the NFP on Tuesday afternoon for my Big 12 spring review.

1. Oklahoma: Former offensive coordinator Kevin Wilson, who landed the head coaching job at Indiana, left the offense in good hands with co-coordinators Josh Heupel and Jay Norvell. The duo will keep this offense productive behind quarterback Landry Jones and receiver Ryan Broyles. Despite the loss of DeMarco Murray, Roy Finch and Co. will be running behind an experienced offensive line. Defensively, the Sooners have an outstanding linebacker trio led by Travis Lewis. 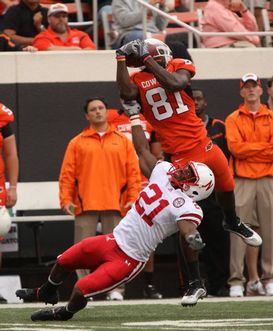 ICONJustin Blackmon is one of nine offensive starters returning for Oklahoma State.

2. Oklahoma State: Like rival OU, the Cowboys will continue to roll offensively despite the loss of former coordinator Dana Holgorsen to West Virginia. Quarterback Brandon Weeden and receiver Justin Blackmon head a returning pack of nine starters on offense. But running back Kendall Hunter is tough to replace — he was one of the more underappreciated backs in the country. Does Mike Gundy’s squad have a good enough defense to claim a Big 12 championship?

3. Texas A&M: When head coach Mike Sherman sent Jerrod Johnson to the bench and anointed Ryan Tannehill the new starter under center, the Aggies took off and ended 2010 as one of the hottest teams in the nation. Running back Cyrus Gray returns to a very good offense, and Christine Michael re-enters the mix in the backfield, as well. But it will be up to second-year coordinator Tim DeRuyter’s unit to give A&M a chance at a league title. Linebacker Von Miller will be difficult to replace.

4. Missouri: Will the Tigers have a Gabbert lining up under center after all? While James Franklin was considered the likely starter in 2011, Blaine’s younger brother is coming off of a solid spring season. But Tigers fans may be more excited about the team’s defense despite the loss of defensive end Aldon Smith. There is good depth up front, and the offense will do its part — as always is the case in Columbia. Mizzou will be an intriguing squad heading into the fall.

5. Texas Tech: Tommy Tuberville is putting his stamp on the Red Raiders in the post-Mike Leach era. Upon arrival in Lubbock, the former Auburn head coach stated that he wanted to run the ball more effectively while keeping the passing attack just as potent. The team has good backfield depth, especially after bringing in a great batch of backs in the latest recruiting class. Expect more sets with tight ends, but Tech has too many weapons to stray away from its aerial attack. Defensively, new coordinator Chad Glasgow hopes his unit plays faster than it did in 2010. The former secondary coach at TCU may need another recruiting class, however, to bring in more speed and better playmakers to Lubbock.

6. Texas: No one expected the Longhorns to endure their downward spiral last fall. With new coordinators on both sides of the ball, head coach Mack Brown wanted to shake things up. Will he get the desired results? While all the talk is about the competition for the starting job under center, the Longhorns’ fate rests in the hands of the rushing attack behind an offensive line that needs to play more physical.

7. Baylor: The Bears have one of the nation’s elite players in Robert Griffin III, and the dual-threat signal caller has playmakers all around him on offense. But can new coordinator Phil Bennett shore up a defensive unit that was embarrassed in its bowl loss to Illinois?

8. Kansas State: Bill Snyder is still looking for a starting quarterback in Manhattan. Many football fans, especially those down in Knoxville, are wondering if Tennessee transfer Bryce Brown will develop into a top-tier running back. Will the defense play well enough to get this team to a bowl game for the second year in a row?

9. Iowa State: Austen Arnaud’s eligibility finally ran out in Ames, so the offense will be led by a new signal caller. Aaron Horne broke out this spring at receiver, hauling in eight catches for 124 yards and a touchdown in the spring game, and the Cyclones will need as many playmakers as possible to step up. Linebacker Jake Knott is the best player on defense, but Iowa State still faces a difficult slate of games in 2011.

10. Kansas: At the Big 12’s post-spring press conference, head coach Turner Gill stressed the need for more speed on the field. He wants the Jayhawks to play much faster in all phases — offense, defense and special teams. Kansas was smoked in most of its contests in 2010. It looks like it’s going to take another full season for Gill to get things turned around in Lawrence.