With the start of the 2013 college football season just a few days away, let's take a look at some power rankings for the Big 12. 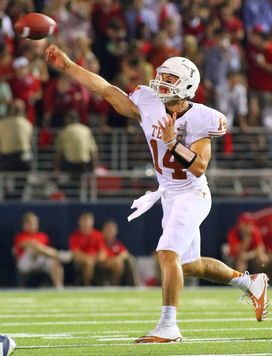 US PRESSWIREDavid Ash is the most experienced signal-caller in the Big 12.

2. Texas: The Longhorns will try to put behind a disastrous defensive effort in 2012. Quarterback David Ash is experienced and the running backs are talented, but can the 'Horns blend the up-tempo with the physical on offense?

3. TCU: Casey Pachall is back to pace the offense, and the Horned Frogs should have the conference's best defense again in their second season in the league.

4. Oklahoma: The Sooners are trying to reclaim the Big 12 crown with redshirt freshman Trevor Knight at quarterback as well as the Bell-Dozer and several playmakers on offense. But the defense was subpar in 2012 and lost some of its best players.

5. Baylor: Art Briles is turning Baylor into the "It" program in the Big 12. The Bears closed last season strong, and new quarterback Bryce Petty should emerge as a star on offense along with tailback Lache Seastrunk. If the defense plays better than last season, the Bears will be the Big 12's dark horse.

6. Texas Tech: The Red Raiders begin their first season under new head coach Kliff Kingsbury, who steps into a nice situation as there are a lot of experienced players on this roster. The defense will be one of Tech's best in many years, but the offense will be run by one of two freshmen quarterbacks until Michael Brewer returns from a back injury.

7. Kansas State: Never sleep on a Bill Snyder-coached squad despite returning only one starter on defense. Do-everything quarterback Collin Klein will be replaced by star JUCO transfer Jake Waters.

8. Iowa State: The defense lost a ton of leadership and talent from linebackers Jake Knott and A.J. Klein. Paul Rhoads is a terrific head coach, and the ground game should be excellent behind a strong offensive line.

9. West Virginia: The Mountaineers lost Geno Smith, Tavon Austin and Stedman Bailey. And the defense may not improve that much from 2012. A tough coaching job looms for Dana Holgorsen.

10. Kansas: Charlie Weis brought in nearly 20 JUCO transfers in this past recruiting class, but will it pay dividends this fall? New quarterback Jake Heaps will try to revert back to the form he showed in his first season at BYU.