Today at the NFP marks the fifth of seven post-spring conference power rankings, continuing with the Big East.

Here is the schedule for the rest of the series:

1. Louisville: Charlie Strong has the Cardinals on the rise as he enters his third season, and there’s no question that the program is becoming more marketable to a Big 12 that may eventually move back to 12 members — or more . In the meantime, Strong continues to build a solid defense, a unit that will be helped by early-enrollee linebackers Keith Brown and James Burgess as well as a very good secondary. But there isn’t great depth across the front seven. Offensively, Teddy Bridgewater will continue to mature and improve as a quarterback, and he is coming off of a strong spring. I leapfrogged the Cardinals over Rutgers after spring because of Bridgewater and expected improvement across the offensive line. 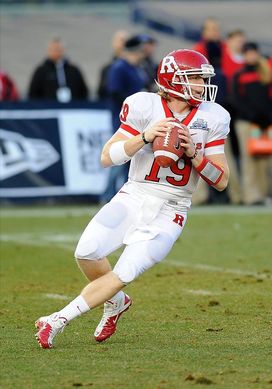 2. Rutgers: The Scarlet Knights acclimated themselves to new head coach Kyle Flood and a reshuffled staff this spring. The offense will remain a pro-style scheme under new coordinator Dave Brock, while newly promoted defensive coordinator Robb Smith will use a similar 4-3 scheme for his very sound unit. So expect the same aggressive, physical mindset on both sides of the ball. The biggest reason for concern with the Scarlet Knights is the quarterback position, where neither Chas Dodd nor Gary Nova ran with the starting job. Replacing Mohamed Sanu will also be difficult. The offensive line and rushing attack also could be concerns.

3. Cincinnati: The Bearcats must replace a lot of veteran talent, starting with quarterback Zach Collaros and running back Isaiah Pead. But they also have a lot of players returning who logged significant playing time. Munchie Legaux is the likely starter at QB, though Brendon Kay had a good spring. At running back, George Winn, Jameel Poteat and Ralph David Abernathy IV will likely split reps until the freshmen arrive this summer. On defense, Butch Jones hopes his unit can continue to play well after rebounding nicely from a disastrous 2010.

4. South Florida: It’s a big season for Skip Holtz and USF. The Bulls have plenty of talent and experience, with 18 starters returning, but can they put it all together and seriously compete for a Big East crown? New defensive coordinator Chris Cosh takes over — the team’s third coordinator in four years. With starting safety Jerrell Young and starting cornerback Quenton Washington gone, the secondary is a concern. B.J. Daniels is still in town, and the question is whether he can finally deliver a consistently strong season. The run game must improve as well.

5. Pittsburgh: The Panthers began the Paul Chryst era, and all eyes will be on the former Wisconsin offensive coordinator as he makes his head-coaching debut. Chryst is exceptional at maximizing the talent of his QB, so we’ll see if Tino Sunseri can play better in a more traditional offense. The coaching staff needs to identify the right combination of offensive linemen this fall that can play consistently well and protect the QB. Ray Graham is expected to return after undergoing knee surgery, but do the Panthers have enough playmakers and depth along the defensive line?

6. Connecticut: The Huskies are replacing three-year starting center Moe Petrus and tackle Mike Ryan, and offensive coordinator George DeLeone will now coach the O-Line in an attempt to straighten out that unit. But the biggest concern for UConn is the play at the quarterback position, where five different players are still in contention for the starting job. Junior-college transfer Chandler Whitmer performed well in the spring game, but highly touted freshman Casey Cochran will continue to study the playbook and try to earn the starting job in the fall. Meanwhile, the Huskies will be very good defensively. Still, that unit will need help from the offense.

7. Syracuse: Doug Marrone and the Orange need to establish a better presence along the defensive line, where pass rushing was a weakness last fall. Chandler Jones and Mikhail Marinovich are gone, so keep an eye on junior college transfers Zian Jones and Markus Pierce-Brewster. Offensively, the Orange need to get back on track on the ground to complement the passing of quarterback Ryan Nassib. Keep an eye on Ashton Broyld, the true freshman who arrived on campus as a quarterback. You could see him lined up all over the field so the team can take advantage of his dynamic athleticism.

8. Temple: Steve Addazio had a tremendous first season in Philadelphia, but the Owls head coach is transitioning his team from the MAC to the Big East. Say what you want about the Big East, but it's a step up in competition from the MAC. The Owls lost stud running back Bernard Pierce, but there is good depth in the backfield. However, there are depth concerns on both lines. Will the defensive front four wear down against better competition?