Big Ten Media Days concludes Friday with all 12 of the league’s head coaches and a few players from each team meeting with reporters in the morning. I’ll have some final thoughts on the league’s annual gathering Saturday morning at the NFP.

But here are some more tidbits from Thursday’s session.

Of course, it wouldn’t be a Big Ten Media Days without Penn State’s Joe Paterno being peppered with the retirement question. The Nittany Lions head coach is entering the last year of his current deal. 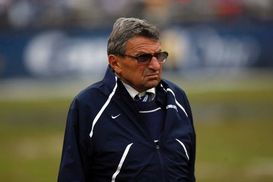 “Is this the last year of my contract,?” the coach jokingly asked. “I don’t even know I got a contact. I don’t pay attention to that.”

Paterno mentioned that he has no timetable on naming a starting quarterback. Of course, the battle under center is between Matt McGloin and Rob Bolden. While Bolden’s future remained very much up in the air this offseason after being denied a transfer, he had a strong camp this spring. Certainly, the Nittany Lions will need their offense to complement what should be a sound defensive unit.

First-year Indiana head coach Kevin Wilson loves the fact that the Big Ten will now have a championship game. He likened the conference’s season-concluding contest to having a Super Bowl in Indianapolis every season.

“I don’t think people in our region understand the power of that game,” Wilson said. “It’s the Final Four in our backyard the next five years. That’s a heck of a deal.”

Can Wilson build the Hoosiers into an annual Big Ten contender? While it may take time, Wilson’s explosive offense will bring quality recruits like quarterback Gunner Kiel to Bloomington. The question remains, as was the case in previous regimes, can IU produce even average defenses to remain competitive in the Big Ten every year?

The highly anticipated first matchup between Nebraska and Iowa on Black Friday — a game that should begin an underrated rivalry in the Big Ten — will now be called “The Heroes Game.” The schools made the announcement at a breakfast news conference Friday.

Prior to each contest between the schools, the respective teams will recognize one Iowa citizen and one Nebraska citizen for an extraordinary act. Those chosen will be honored on the field and have their name and hometown engraved on the Heroes Game trophy. The schools will also use proceeds from the game to benefit the Iowa and Nebraska chapters of the American Red Cross.

Illinois head coach Ron Zook — seemingly always on the coaching hot seat — hopes that senior Craig Wilson could make an impact at defensive tackle this fall. The 6-6, 320-pound former tight end is projected to start at one of the tackle spots this season. 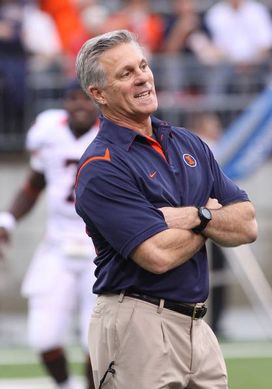 “He’s got to learn to play the position, but he’s a big load,” Zook said. “He can hunker down in there and help you in the middle there.”

Zook also has high hopes for running back Jason Ford, who has big shoes to fill following the departure of Mikel Leshoure. Ford was limited this spring by an injury and a legal matter, but Zook is confident in his ability to lead the Illini’s rushing attack.

“This is the first summer he’s made every one of his runs,” Zook said. “He’s controlled his weight. His power and ability to run has never been an issue. He’s such a physical runner. I don’t put pressure on him to prove something. A year ago, I would have said he was the guy.”

A lot of Iowa fans I have talked to are concerned with the team’s front four because of all the talent it lost to the NFL. While the star power may not be there this season, the Hawkeyes developed good depth while Adrian Clayborn and Co. received the majority of snaps the last few seasons. Battle-tested veterans Mike Daniels and Broderick Binns will anchor the line, but Ferentz said we’ll likely see a combination of players to fill the two other spots.