CHICAGO — Big Ten Media Days kick off at the Hilton on Wednesday morning as the road to the start of preseason camps continues with the annual press gathering in Chicago. 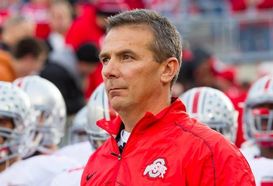 US PRESSWIREUrban Meyer has been known to attract a large crowd at a press gathering.

Besides Ohio State head coach Urban Meyer likely being asked numerous questions about Aaron Hernandez, his former Florida program, Carlos Hyde and Bradley Roby, expect conference commissioner Jim Delany to be asked plenty of questions about the numerous issues facing the NCAA and the ever-evolving changing landscape of the sport.

Here is what you need to know about the two-day event...

Other things to keep an eye on...

* Coaches will continue to get asked about the SEC's dominance and how the Big Ten could close the gap on Mike Slive's league. The SEC remains the king of the mountain, winning national titles and Heismans seemingly at will. Meanwhile, the Big Ten went 2-5 in bowl games last season and had just Braxton Miller in the Top 10 of Heisman voting.

* Michigan's Devin Gardner has been the talk of the offseason because of the way he took over the offense and played well to close out the season last year. But Brady Hoke will continue to get asked about the running back situation and whether Derrick Green could be a No. 1 back as a true freshman.

* Gary Andersen will be taking part in his first major-conference Media Days. Can he keep the two-time defending league champs atop the conference?

* Bo Pelini will certainly be asked about Nebraska giving up 70 points to Wisconsin in the Big Ten title game and 589 yards against Georgia in the Capital One Bowl. The Blackshirts have been M.I.A. in Lincoln.

* Expect Bill O'Brien to answer questions about his potential interest in an NFL head gig as well as his hope for the NCAA to reduce penalties from the Jerry Sandusky investigation.

* After a four-win season filled with some anemic offensive displays, Iowa head coach Kirk Ferentz will likely get asked about being on a hot seat. But he isn't going anywhere, especially with a reported large buyout. Nonetheless, expect improvement from the Hawkeyes in 2013.

* Beginning in 2014, the Legends and Leaders division names will be changed to East and West when Rutgers and Maryland arrive. Also, teams will begin playing a ninth conference game. The league also has new bowl tie-ins starting next year with the Holiday in San Diego and Pinstripe in New York.