Today at the NFP marks the fourth of seven post-spring conference power rankings, continuing with the Big Ten.

1. Michigan State: The Spartans are experiencing life without Kirk Cousins, one of the Big Ten’s most impressive players both on and off the field. Andrew Maxwell has taken the reins from the three-year starter, and in the fall he’ll inherit Tennessee transfer DeAnthony Arnett, a receiver who was given a medical hardship waiver by the NCAA for the upcoming season. He’ll be joined at the receiver position by Bennie Fowler. The running game will be strong, but the Spartans will miss do-everything receiver/returner Keshawn Martin. Defensively, All-American Jerel Worthy is tough to replace. However, Pat Narduzzi’s unit may be the best in the Big Ten. Overall, the Spartans may be the most athletic team in the league. 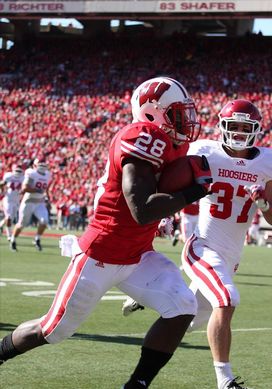 ICONCan Montee Ball and the Badgers make yet another trip to the Rose Bowl?

2. Wisconsin: Head coach Bret Bielema had to hire six new assistants this offseason, and all eyes will continue to be on new offensive coordinator Matt Canada, who replaces Paul Chryst. Russell Wilson is gone, so Maryland transfer Danny O’Brien will try to lock down the starting job and hold off Joel Stave in fall camp. Meanwhile, prolific running back Montee Ball returns, but he’ll be running behind an offensive line that is replacing three high-quality blockers. Defensively, end David Gilbert returns after missing most of last season with a broken foot. But will they be stout enough along the defensive line?

3. Michigan: Defensive coordinator Greg Mattison was able to transform his unit into a strength last season because of his emphasis on strong play up front. With Mike Martin and Ryan Van Bergen gone, this area still has work to do in fall camp to help make up for a secondary that is still green. Offensively, Denard Robinson will enter his final season in Ann Arbor with a year of Al Borges’ offense under his belt. “Shoelace” is unquestionably a rare talent, but he must cut down on his 15 interceptions if this team wants to return to a BCS game. Fitzgerald Toussaint, meanwhile, proved last season that he can be a No. 1 running back.

4. Nebraska: Head coach Bo Pelini is replacing linebacker Lavonte David, cornerback Alfonzo Dennard and defensive tackle Jared Crick — three of the Big Ten’s best defenders, although Crick missed most of last season due to injury. This Cornhuskers defense will be breaking in a new coordinator in John Papuchis, and he’s looking for playmakers and leaders to emerge. On the offensive side, Taylor Martinez must continue to develop as a passer after staying healthy last season. He completed just over 56 percent of his throws last fall, but he will enter his second year in Tim Beck’s offense and worked on his mechanics and footwork throughout the offseason.

5. Ohio State: The Buckeyes will not be going bowling in 2012, but the program has been revived under former Florida head coach Urban Meyer, who brings two national championships to Columbus. Although Meyer admitted that a lot of work needs to be done at the quarterback position, Braxton Miller is the prototypical quarterback for this spread offense, and he may have found a go-to receiver in freshman Michael Thomas, who caught 12 passes for 131 yards in the team's spring game. Meyer is coming off of a recruiting cycle that featured SEC-type defensive linemen — exactly the type of situation to excite co-defensive coordinators Luke Fickell and Everett Withers.

<p> 6. Iowa: The Hawkeyes have new coordinators on both sides of the ball, as Phil Parker and Greg Davis will be running the defensive and offensive shows, respectively. For Parker, his main concern is along the defensive line, where the Hawkeyes lost three starters, including tackle and NFL draft pick Mike Daniels. Offensively, Davis will need to find a running back to replace Marcus Coker, who transferred to Stony Brook. Jordan Canzeri’s ACL injury was a tough blow, so Jason White could be in line for more reps as the team looks to complement quarterback James Vandenberg and the passing attack. The team is also hopeful that true freshman Greg Garmon emerges in fall camp to contribute in the new up-tempo, multi-dimensional offense.

7. Penn State: Former New England Patriots offensive coordinator Bill O’Brien ushered in a new era of Penn State football this spring. The Nittany Lion players were able to get comfortable with the new staff, but the new coaches still need time to fully implement their systems. It’s likely that O’Brien will turn to Matt McGloin and not Rob Bolden as his starting quarterback, but how much improvement will the team see at the position in a new, up-tempo offense? Top running back Silas Redd may be leaned upon behind an improved offensive line. The strength of the defense will be the front seven, as coordinator Ted Roof looks to rebound from a rocky stop at Auburn.

8. Purdue: The Boilermakers once again have a plethora of quarterbacks to choose from this fall, as Caleb TerBush and Robert Marve are joined by Rob Henry in the derby — and all have starting experience. Henry likely would have started last season if not for a knee injury, while TerBush started every game in 2011. Defensively, another new coordinator arrived in West Lafayette — the third consecutive season a change has been made. Tim Tibesar is the new DC and will look to improve a unit that struggled to create turnovers last season (bowl game aside). Head coach Danny Hope is excited about this team, especially because it returns 18 starters. If the offensive line plays well, this could be a dark horse Big Ten squad. 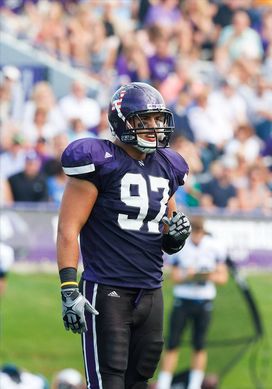 ICONYoung players such as end Tyler Scott will need to step up for NU to improve defensively.

9. Northwestern: The Wildcats will always be able to move the football and score points while running the spread offense, and Kain Colter will seamlessly take over for star Dan Persa at quarterback this fall. He'll have one of the deepest receiving corps in the league to work with, and the unit could include USC transfer Kyle Prater if the NCAA rules him eligible to play immediately. But head coach Pat Fitzgerald must be able to rely on at least an average defense, and that’s something he hasn’t been able to do since being the face of the program. Young players such as defensive end Tyler Scott and linebacker Collin Ellis saw action last year, and the hope is that they will mature as starters. But the woeful secondary lost their best players — including All-Big Ten s afety Brian Peters and four-year starting cornerback Jordan Mabin. Cornerback Nick VanHoose had a strong spring, however.

10. Illinois: The Fighting Illini began the Tim Beckman era after Ron Zook failed to win consistently in Champaign. The biggest loss for the Illini, however, may have been Vic Koenning, who left to run North Carolina’s defense. The Illini played hard for Koenning, so the team will have to buy into new DC Tim Banks. He’ll have a good defensive line to work with despite the loss of All-American end Whitney Mercilus, who was dominant last fall. End Michael Buchanan and tackle Akeem Spence lead the way up front. Meanwhile, co-offensive coordinators Billy Gonzales and Chris Beatty may alternate between quarterbacks Nathan Scheelhaase and Reilly O'Toole. Josh Ferguson could be the answer at running back, but who will make plays at receiver?

11. Minnesota: Jerry Kill endured a rough first season with the Golden Gophers, both on and off the field. But if Minnesota is to improve in Year 2, dual-threat quarterback Marqueis Gray needs some playmakers to emerge around him. Defensively, coordinator Tracy Claeys may have to be creative in lieu of a lack of talent on all three levels. The defensive line should be improved, though, and that's huge for a defense that hasn't been able to generate a strong pass rush the last few seasons. That would help out a suspect secondary.

12. Indiana: The Hoosiers hope to provide head coach Kevin Wilson a smoother campaign in his second year on the job. New offensive coordinator Seth Littrell will try to help quarterback Tre Roberson in the passing game, but this team cannot compete if the defense is as woeful as it’s been in recent years. Young players like safety Mark Murphy and end Bobby Richardson need to play consistent, and junior college players brought in such as linebackers David Cooper and Jacarri Alexander need to contribute immediately. This team played a ton of freshmen in 2011, so a year of experience will certainly help.