With spring practices wrapping up across the nation, I'll be running down my post-spring conference power rankings. First up, the Big Ten.

Be sure to check back with the NFP this afternoon for my Big Ten spring review.

1. Ohio State: The Buckeyes remain on top until another team knocks them off. If they could get through the five-game suspensions of key players unscathed, the game against Nebraska in Lincoln should be the best contest of the Big Ten season.

2. Nebraska: The only thing stopping the Cornhuskers from having a very successful debut season in the conference is unfamiliarity with their new league foes. The defense will be stout, and the revamped offense should click if Taylor Martinez stays healthy. 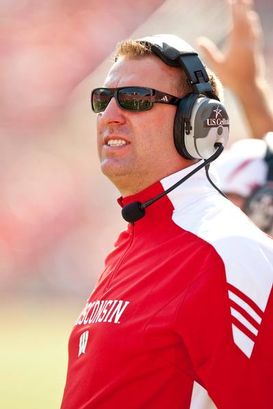 3. Wisconsin: I’m buying into Jon Budmayr as the new quarterback despite his uneven spring. Besides, any Badger quarterback will be successful with that rushing attack behind the always solid offensive line.

4. Michigan State: The Spartans looked overmatched in their two biggest games last season — at Iowa and against Alabama in the bowl game. If their offensive line develops some chemistry, quarterback Kirk Cousins has the running game to keep the offense clicking on all cylinders.

5. Iowa: Kirk Ferentz seems to do his best coaching jobs when the Hawkeyes are overlooked, and they will be in 2011 without Ricky Stanzi and a veteran defensive line gone. But James Vandenberg and Marcus Coker are solid, and Keenan Davis should take pressure off fellow wideout Marvin McNutt. Can the defense still be solid without so many veterans? Never discount a Ferentz-coached squad.

6. Penn State: I don’t know if Rob Bolden will ultimately win the job under center, but I like the way he performed this spring. The lines on both sides of the ball will tell the tale for the Nittany Lions in 2011. If they can rush the quarterback and create holes for the running game, Joe Paterno’s squad should be near the top of the conference standings.

7. Northwestern: The Wildcats gave a few games away in 2010. With Pat Fitzgerald a fixture in Evanston, that can’t happen next fall if the ‘Cats want to be considered an upper-echelon Big Ten squad. Quarterback Dan Persa sat out spring drills as he continues to recover from his Achilles injury, but he was arguably the best player in the Big Ten last season. Can the ‘Cats stop anyone on defense? That’s the major question.

8. Illinois: Offensive coordinator Paul Petrino wanted to make quarterback Nathan Scheelhaase a more polished passer, and he looked the part by the end of spring. Losing Mikel Leshoure puts a lot of pressure on Jason Ford and Troy Pollard at running back, and the defense will feel the effects of losing top draft picks Corey Liuget and Martez Wilson. But as head coach Ron Zook told me earlier this spring, the secondary should be the strength of the team for coordinator Vic Koenning. Can Zook deliver back-to-back winning seasons for the Illini?

9. Michigan: Al Borges’ offense still needs some work, and all eyes will be on Greg Mattison’s defense following a couple of disastrous campaigns under Greg Robinson. But the players seem to be comfortable under Brady Hoke and the new staff. Michigan is on the right track, and it helps to have a special talent in Denard Robinson leading the way.

10. Purdue: The Boilermakers had an enthusiastic and lively spring season, and Rob Henry looked more comfortable under center. But will he be able to hold off injury-prone Robert Marve in the fall? The running game should be sound, but the loss of Keith Smith hurts the receiving corps. Can Danny Hope’s team grow defensively and take care of the football on offense?

11. Indiana: Kevin Wilson didn’t look overwhelmed in his first spring as a head coach. His biggest task is changing the losing culture in Bloomington. Once he finds a starting quarterback, his offense will put up points. But do the Hoosiers have enough defenders to prevent the big play?

12. Minnesota: All Jerry Kill has done throughout his career is rebuild and win. Even in a BCS conference, Kill should be able to do the same with the Gophers. MarQueis Gray is a talented signal caller, but there are questions along the offensive line and at receiver.

In case you missed it on Monday, check out my post-spring Top 25.