Saturday is a huge day for spring games across the college football world, especially in the Big Ten where six spring showcases will be taking place.

It’s never too early to start talking about the upcoming season, so let’s take a glance at some of the more intriguing storylines for these six Big Ten teams as they put a bow on spring camp. 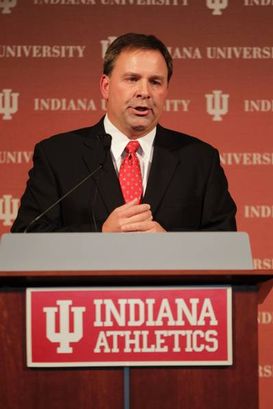 ICONKevin Wilson makes his debut as head coach during the IU spring game.

First-year head coach Kevin Wilson will continue to treat IU fans to high-powered offenses. In fact, the Hoosiers should be even more potent moving the ball than they have been in recent years because of the up-tempo nature of Wilson's scheme. Standout playmaker Damarlo Belcher isn’t the only receiver who should have a big year, either, as Duwyce Wilson and Kofi Hughes could be poised to put up numbers in this offense after having impressive springs. In addition:

• The four-way competition to replace Ben Chappell at quarterback continues with sophomores Dusty Kiel and Edward Wright-Baker leading the way. While the job likely will be decided in August, Kiel seems to have the edge. But the spring game will be a nice test to see which signal caller runs the offense more efficiently.

• As always, though, it comes down to the defense in Bloomington. The Hoosiers can score 35 points per game, but will they give them right back as we’ve been accustomed to seeing throughout the previous regimes? The team went with full pads during almost every practice session this spring as Wilson looks to instill more toughness. The big concern is whether he could change the culture of losing within the program. Don’t be surprised to see a lot of youngsters on the field as the former Oklahoma OC looks to put his stamp on his first squad.

The Hawkeyes wrap up spring practice with an open scrimmage and not a traditional game on Saturday at Kinnick Stadium. Still, this will be the team’s final public showing before August, so here are a few things to keep an eye on:

• Micah Hyde has moved from cornerback to free safety after the team lost safeties Brett Greenwood and Tyler Sash from last season. In addition, Tanner Miller was out this spring after shoulder surgery. Defensive coordinator Norm Parker has said, however, that Miller could assume the starting free safety gig when he returns to health, shifting Hyde back to corner.

• Don't call him Dawson Leery, because James Vandenberg could throw the football. From all the reports out of Iowa City, the heir apparent to Ricky Stanzi is ready to prove that his performance at Ohio State in 2009 was a sign of things to come. Stanzi will be missed, but Vandenberg just may be able to fill the void better than most.

• We know about Iowa’s special teams woes from last season. Well, kicker and punter are still open races. Mike Meyer was a solid 14 of 17 on field goals in 2010, but Trent Mossbrucker is still in the mix after losing the job following his blocked PAT against Arizona. Eric Guthrie, meanwhile, has been bench-ridden for four years because of Ryan Donahue punting so well. Guthrie’s competition is Australian Jonny Mullings.

New head coach Brady Hoke makes his debut, and fans certainly hope this Michigan Man can bring some respectability back to Ann Arbor. The former San Diego State head coach has stressed that no starting job is guaranteed, so look for strong efforts from those involved in serious positional battles — specifically in the secondary as well as the running back and kicker spots. Because there are depth issues at some positions, the format of the game won’t be traditional. The first-team offense will be paired with the second-team defense, while the first-team defense locks horns with the second-team offense. The game would usually feature two teams drafted by players in the senior class, but the lack of depth on the offensive line and some key injuries (potential starting cornerbacks Troy Woolfolk and J.T. Floyd will miss the contest) necessitated the changes. Still, the two most intriguing aspects of this team remain:

• How will Denard Robinson look in Al Borges’ new pro-style offense? The veteran offensive coordinator has maintained that while he won’t be running the spread, the Wolverines will still employ three- and four-receiver sets and utilize the shotgun within this offense. According to Borges, Robinson has looked good this spring, completing more than 65 percent of his throws.

• Will Greg Mattison’s defense at least be respectable? The Wolverines will move to a four-man front and ditch the 3-3-5. Rush ends Craig Roh and Jibreel Black have had strong camps, and Hoke has also singled out the play of Will Campbell after moving back to the defensive line from offense. 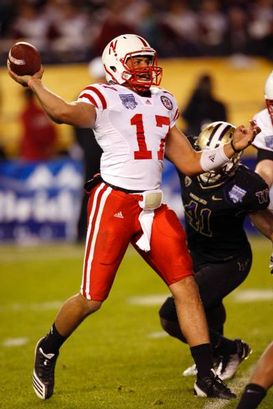 ICONCody Green will see plenty of action under center for Nebraska on Saturday.

A spring game is always a big deal in Lincoln, and this year is no exception as the Cornhuskers prepare for life in the Big Ten at Tom Osborne Field. Here are some things for fans at Memorial Stadium to watch for:

• How will the shuffled offensive line fare against coordinator Carl Pelini’s defensive line? The Huskers will need to be physical up front, but it’s an inexperienced group protecting the Huskers signal callers. True freshman Tyler Moore and redshirt freshman Jake Cotton are two players to keep an eye on because they vaulted up the depth chart this spring. Meanwhile, end Cameron Meredith and tackle Jared Crick have been sidelined, but it didn’t matter too much because of the team’s depth along the defensive line. Keep an eye on tackle Thad Randle and undersized end Eric Martin.

• Will there be Magic? While quarterback Taylor Martinez will see action on Saturday, it will be on a limited basis because of lingering ankle and toe injuries. Yes, T-Magic is still battling the injury bug. But he will have the entire summer to heal, and he will be lining up under center in the opener as long as he is healthy. So with Kody Spano out, as well, look for Cody Green and Brion Carnes to run the new no-huddle offense. Carnes is coming off a very nice scrimmage last week, while Green reportedly has impressed the coaching staff with improved passing mechanics.

While the Evanston campus is still buzzing with the announcement Thursday of the home-and-home series being scheduled with Notre Dame, Pat Fitzgerald’s Wildcats will turn their attention back to the field for the annual spring game. First-team All-Big Ten selection Dan Persa didn’t really do much this spring, but he remains ahead of schedule in his rehab and will be 100 percent when fall rolls around. For now, though, the quarterback reps will continue to be split among Trevor Siemian, Evan Watkins and Kain Colter.

• Keep an eye on Tyris Jones, who has impressed the coaching staff this spring. Incumbent Mike Trumpy has returned from his wrist injury, but NU once again will put an emphasis on running the football. Along with Adonis Smith, the spotlight will be on multiple backs as the ‘Cats will need to have a more balanced offense in 2011 to take some pressure off of Persa.

• Mike Hankwitz’ defense could have an emerging star in the secondary. Redshirt freshman safety Ibraheim Campbell has had a strong spring and could be a much-needed playmaker for a ‘Cats defense that really struggled down the stretch last season.

The Nittany Lions made news on Wednesday when the program announced that the team will wear trimless, old-school uniforms in the fall. The ensemble will very much look like the uniforms from the 1970s, with the trims around the collars and sleeves no longer. Unfortunately, the new jerseys won’t be worn at the Blue-White Game this weekend.

That was the off-the-field news. On the field, a quarterback battle for the starting job continues to take place between Matt McGloin and Rob Bolden. And head coach Joe Paterno has said that the race is still too close to call as both signal callers split reps with the first-team offense. Will Bolden opt to transfer if he’s relegated to backup duty, or will this competition extend to the fall?

• The other major question mark besides quarterback is play on both sides of the line of scrimmage. The defense was hit hard up front with injuries last fall, and the Nittany Lions lost end Pete Massaro to a torn ACL early this spring. Meanwhile, fellow ends Jack Crawford and Eric Latimore are also banged up. On the offensive side of the ball, can the line resemble the typical Penn State units we were used to seeing before the dropoff in the last few years? The Lions will not be able to compete for a Big Ten title without a sound rushing attack — and it starts with being more physical up front.

Be sure to pick up some adult beverages and follow all the spring ball action on Saturday.