1. Ohio State: The Buckeyes have a very friendly schedule in 2013, and quarterback Braxton Miller continues to improve as a passer. They are unquestionably the top dog in the Big Ten. But the defensive front remains a bit of a concern, although sophomore ends Adolphus Washington and Noah Spence could be poised for breakthrough seasons. And second-year head coach Urban Meyer has some more depth after another great recruiting class. 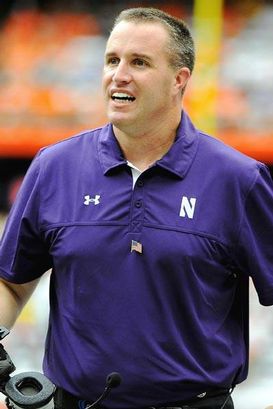 US PRESSWIREPat Fitzgerald and the Wildcats will host Ohio State in October.

2. Northwestern: The Wildcats gave away several games last year and still managed to make a New Year's Day bowl appearance. Pat Fitzgerald's squad hosts Ohio State under the lights in October in a game that could have national implications. This team won 10 games in 2012, and it could contend for a conference title this fall if it has learned how to close out games.

3. Nebraska: If Taylor Martinez and the offense can drastically cut down on their turnovers, it can be one of the best units in the country. The major concern for Bo Pelini and his staff, though, is the defense, which will need time to gel. The early portion of the schedule should allow for that to take place, but will the inexperience of the Huskers 'D' be too much to overcome?

4. Michigan: Quarterback Devin Gardner enters a season filled with high expectations, but the Wolverines will have to play without star outside linebacker Jake Ryan until at least mid-October. If the run game can get boosted by true freshman power back Derrick Green, Greg Mattison will likely be able to get enough out of the defense so that the Wolverines can compete for a Legends division crown.

5. Michigan State: We know that the Spartans defense will be strong once again, perhaps even better along the line than even last year's group. But can Andrew Maxwell and this offense be even average? I'm buying Maxwell in Year Two as the starting quarterback after head coach Mark Dantonio had the quarterbacks be "live" this spring. But Maxwell needs much more help from his receivers than he received in 2012. The Spartans also will need the running back committee to be solid in replacing stud Le'Veon Bell. The schedule isn't terrible, so MSU could surprise.

6. Wisconsin: New head coach Gary Andersen still has to decide between Joel Stave, Curt Phillips and possibly Tanner McEvoy for the starting quarterback job, but the run game will once again be productive with Melvin Gordon and company. Defensively, the loss of end David Gilbert was a blow. However, never sleep on the Badgers in the Leaders division.

7. Penn State: Second-year head coach Bill O'Brien worked wonders with Matt McGloin last season, so the Nittany Lions should be able to get respectable play out of the quarterback position whether junior college transfer Tyler Ferguson or true freshman Christian Hackenberg is under center. But how will the Nittany Lions replace several leaders on defense from 2012?

8. Minnesota: The Gophers went bowling last season, so third-year head coach Jerry Kill and his staff will try to continue that momentum this fall. Sophomore quarterback Philip Nelson hopes to improve the team's aerial attack, but is there enough material on defense to return to the postseason?

9. Purdue: The Boilermakers are coming off of back-to-back postseason appearances, but they elected to bring in a new head coach anyway. The arrival of Darrell Hazell has been a smooth transition, however, although the team needs to find its answer at quarterback. Running back Akeem Hunt should be in line for a very good season, and the secondary may be one of the best in the Big Ten.

10. Iowa: Could this be the type of Hawkeyes squad that overachieves when many believe there are too many questions to overcome? Longtime head coach Kirk Ferentz suffered through a rough 4-8 season in 2012, and he has to decide between Jake Rudock, Cody Sokol and C.J. Beathard at quarterback. Mark Weisman and Damon Bullock return at running back, but are there enough weapons at receiver?

11. Indiana: The Hoosiers unquestionably will score points. Quarterbacks Tre Roberson, Nate Sudfeld and Cameron Coffman are all back fighting for the starting job, and their group of receivers is the envy of Big Ten offensive staffs. Kevin Wilson's team could sneak into a bowl game, but the defense has to be somewhat respectable. That could be asking a lot in Bloomington, however.

12. Illinois: Tim Beckman and the Fighting Illini received fantastic news on Monday when former Oklahoma State signal-caller Wes Lunt decided to head to Champaign. But he won't be eligible to play until 2014, and this staff hopes to still be on campus. Nathan Scheelhaase will have a chance to chuck the football around in new coordinator Bill Cubit's offense and try to improve a unit that finished last in the Big Ten in scoring last year, but will the team's JUCO players make an immediate impact?