The 2014-15 college football postseason continues on Friday with the Bitcoin Bowl between Central Florida and North Carolina State at Tropicana Field, which is the home of Major League Baseball’s Tampa Bay Rays.

Let's take a closer look at the matchup between the Knights and the Wolfpack. 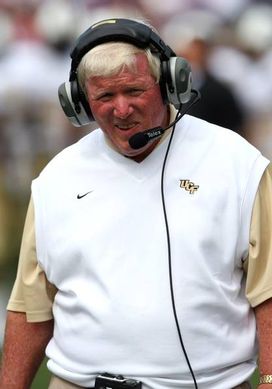 ICONGeorge O'Leary has a chance to finish with at least 10 wins for the fourth time in five seasons.

The Knights were able to notch nine wins under head coach George O'Leary this fall despite losing star quarterback Blake Bortles to the NFL. A 51-yard, game-winning Hail Mary touchdown pass from quarterback Justin Holman to receiver Breshad Perriman against East Carolina helped UCF net a share of the American Athletic Conference title, which was a nice follow-up to the team's breakthrough BCS win last year and its 0-2 start this fall. Holman should be able to move the ball through the air against the NC State defense and give UCF a chance to finish with at least 10 wins for the fourth time in five seasons. Holman didn’t begin the season as the starter, but he’s enjoyed a nice 2014 campaign. And the team's strong defense complemented the offense throughout the year.

The Wolfpack, meanwhile, rallied to win three of their final four contests to make the postseason in the second year under head coach Dave Doeren, whose team is in a bowl game despite suffering through a four-game skid during the year. The play of quarterback Jacoby Brissett has been outstanding throughout the season. The former Florida Gator recorded 22 passing touchdowns and just five interceptions while adding 498 yards and three scores on the ground. Running back Shadrach Thornton (811 rushing yards and nine touchdowns) and receiver Bo Hines (42 receptions for 537 yards) have been the Wolfpack's most productive playmakers for Brissett. Despite just slipping into the postseason, this is a team that managed to lead Florida State by 17 points late in September before falling to the Seminoles. So it's been an exciting, yet up-and-down campaign for the 'Pack. Brissett will need to be sharp because UCF is very good against both the run and the pass, and the UCF defense ranks ninth nationally in scoring 'D,' led by AAC defensive player of the year Jacoby Glenn.