Gene Bleymaier, who was the force behind the team's blue turf at its football stadium and helped oversee the football team's rise to national prominence, was dismissed as Boise State's athletic director as the university faces NCAA sanctions because of violations in the football program and other sports. His 30-year tenure at the school will end Sept. 8, as announced by school president Bob Kustra on Wednesday.

"I did not come to this decision lightly," Kustra said in a statement. "After a careful management review and discussions about the future of the program, I determined that new leadership will be needed as we commit ourselves to the highest level of attention and enforcement of NCAA standards, and also continue to move Boise State athletics to the next level of success." 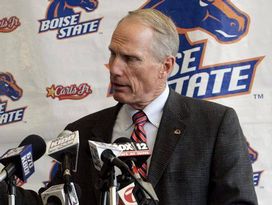 Boise State AD Gene Bleymaier was let go after 30 years on the job.

The 57-year-old Bleymaier met with Kustra last Thursday and fought to keep his job, but it was to no avail.

"I did let him know that I wanted to stay, and I think he knows that I'm very disappointed," Bleymaier said. "We're very proud of what we've been able to do here in my time."

"I was told by President Kustra that his decision is predicated on the confidence level he believes he needs to have as president in the university's compliance operations during an NCAA probationary period."

The football violations, which are being reviewed by the NCAA, occurred between 2005 and 2008. In its response to the sport's governing body, the school noted a series of "secondary" violations by the football staff, including coaches arranging for incoming players to receive cheap transportation, meals and housing during voluntary summer workouts. Those benefits were valued at less than $5,000.

The program already self-imposed penalties, including a three-year probation period, loss of scholarships over the next two years, forfeiting practice time and changes in its compliance office. The NCAA has yet to make a decision on the matter, so it's unknown up to this point if further sanctions are on the horizon. Violations within the athletic program occurred in other sports as well, including men's and women's tennis, and track and field.

Bleymaier said he believes he handled the infractions and the internal investigation well.

"We have been commended regarding how we have handled the investigations and review from start to finish," he said.

Bleymaier took over as athletic director in 1982 and led the Broncos through their transition to Division I-A in football in 1996 as well as a pair of stadium expansions in the last decade. He also led the drive in implementing the blue turf in Bronco Stadium and the move from the WAC to the Mountain West.