Following last Saturday's slew of upsets, Week 7 provides some major programs that were College Football Playoff preseason favorites the chance to bounce back and continue their quest to make it into the four-team postseason dance.

Let's take a look at some of the teams looking to put last week's setbacks behind them.

Alabama: The Crimson Tide have a road test at Arkansas one week after their loss to Ole Miss in Oxford. The Razorbacks are one of the better two-loss teams in the country, with setbacks against Auburn and Texas A&M, and Bret Bielema’s squad is coming off of a bye week. The Tide’s run defense is the best in the SEC, as Kirby Smart’s unit is allowing less than 65 yards per game on the ground. But Arkansas’ rushing attack is the most potent in the SEC, churning out over 316 yards per contest, led by Jonathan Williams and Alex Collins (a combined 1,107 yards and 14 rushing touchdowns) behind a mammoth offensive line. The Crimson Tide have beaten the Hogs by scores of 52-0 the last two seasons. That won't happen on Saturday, but the Tide can be victorious if wide receiver Amari Cooper gets plenty of looks. He is averaging 149.2 yards per game and is going up against an Arkansas secondary that is allowing 263.8 yards per contest through the air. 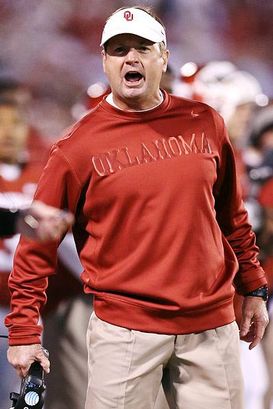 US PRESSWIREBob Stoops and the Sooners look to put behind their loss to TCU.

Oklahoma: The Sooners are in Dallas to play Texas in the annual Red River Shootout, and Bob Stoops' squad is looking to rebound from a loss to TCU last week. It may not have the national appeal that it once had because of the recent struggles of the Longhorns, but this rivalry game is crucial for OU as it looks to run the table and hope that TCU drops a game in the Big 12. In last year's contest, Mack Brown's 'Horns blew out an undefeated Sooners squad. Can Charlie Strong pull the upset in his first Red River Rivalry as the head man in Austin? Trevor Knight struggled last week against the Horned Frogs, so expect a healthy dose of running back Samaje Perine. But the 'Horns have a legit defense.

Texas A&M: The Aggies host an Ole Miss squad that is coming off of its breakthrough win over Alabama. Meanwhile, Kevin Sumlin’s squad was blown out at Mississippi State one week after barely surviving its test against Arkansas at Jerry World. A&M still has depth issues on defense, and the offense was out of sync throughout its loss to the Bulldogs in Starkville because of dropped passes and an inconsistent Kenny Hill. But College Station will be rocking, which will present a tough test for Rebels signal-caller Bo Wallace, who excelled down the stretch against the Tide last week. A&M freshman defensive star Myles Garrett already has 6.5 sacks and could prove to be a disruptive force against the Rebels if he isn't being chipped by tight ends and running backs at the line of scrimmage.

Oregon/UCLA: The Ducks and the Bruins square off at the Rose Bowl in Pasadena with both teams looking to remain in the Pac-12 race and avoid a second loss. In Week 6, Oregon fell at home to Arizona and UCLA suffered a home loss to Utah. The main culprit in both losses was poor offensive line play, so it will be interesting to see which signal-caller can surive this one. Marcus Mariota has been sacked 12 times in the last two games, while Brett Hundley suffered through a 10-sack night against the Utes. For the Ducks, a ton of injuries up front has been the difference. The team was without its top three offensive tackles, starting a freshman at left tackle and a former walk-on at right tackle, in the loss to the Wildcats. For UCLA, however, problems across the O-Line have been evident for a few years. Over the last three seasons, Hundley has been sacked an FBS-worst 107 times. Mariota is still an elite NFL Draft prospect, but Hundley needs to improve his pocket awareness despite being one of the higher-ranked quarterbacks on draft boards. He has seemed a bit unsure this fall of where to go in the pocket and when to take off and run. Meanwhile, the Bruins have had trouble getting to opposing quarterbacks this season — they have just seven sacks in five games — so will the Ducks' O-Line be the right tonic?

Note: Stanford bounced back from its road loss at Notre Dame with a 34-17 victory over Washington State on Friday night. Quarterback Kevin Hogan threw for 284 yards and three touchdowns, while the defense held Wazzu signal-caller Connor Halliday to 292 passing yards on 69 passing attempts. The Cardinal can be a player still in the CFP race despite having two losses, but a tough road looms: games at Arizona State, UCLA and Oregon. Meanwhile, Nebraska is enjoying a bye week after falling to Michigan State in East Lansing. The one-loss Cornhuskers travel to Evanston to face Northwestern next week.