Brown could be a huge boost for OU's offense

Oklahoma's depleted receiver corps enjoyed a major boost this week when Justin Brown decided to transfer to Norman and play his senior season for the Sooners.

The former Penn State star was just the latest in the line of Nittany Lion players who elected to depart State College following the NCAA's sanctions against the Big Ten school. Because of the penalties against Bill O'Brien's program, Brown can play right away without having to sit out a year.

The ex-PSU receiver participated in his first OU practice Tuesday after flying in the night before. Because of NCAA rules, however, he could not yet participate in pads with the rest of his new teammates. 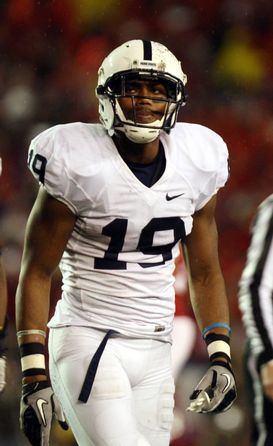 US PRESSWIREJustin Brown had 35 receptions for 517 yards and two touchdowns last year in a run-first Penn State offense.

The arrival of the 6-3, 214-pounder, who also reportedly had been contacted by Cincinnati and Illinois, provides a big boost to an aerial attack that was lacking major-college experience at the WR position.

Wide receivers coach Jay Norvell was looking for an immediate-impact playmaker with his corps taking a few hits this offseason. The Sooners only have one fully active receiver — star junior Kenny Stills — who has a career FBS reception. Kameel Jackson was kicked off of the team last week, while head coach Bob Stoops said that Jaz Reynolds and Trey Franks will miss a considerable amount of time despite being reinstated last week from suspension.

If Brown can quickly digest the Sooners playbook, his presence will be able to take a little bit of pressure off of Stills, who is one of the best receivers in the country.

Brown had 35 receptions for 517 yards and two touchdowns last fall, and those numbers were within an offense that was run-first and which struggled to move the ball through the air because of subpar quarterback play. Now, Brown will find that he'll have more big-play opportunities in the Sooners' wide-open spread scheme, which made his decision to leave State College for Norman a much easier one.

And OU veteran quarterback Landry Jones likely is all smiles at the thought of a proven weapon being added to the offensive mix.

A bonus from Brown's arrival for the Sooners is the fact that he will be an excellent special teams contributor as well, as Stoops has said that Brown will return punts after ranking 36th in the nation in punt returns in 2011.

Despite the team's personnel issues along the offensive line, OU remains a BCS national title contender. And the arrival of Brown just strengthened an area that was considered a question mark heading into the 2012 season.