Buckeyes back to work after their undefeated campaign

Ohio State began spring practice on Tuesday with the highest of expectations following an undefeated 2012 campaign.

1. How much has Miller improved as a passer?

Meyer's power run game should be more effective in his second year in Columbus with the Buckeyes returning four senior starters on the offensive line who have combined for 80 starts. Senior Carlos Hyde, who rushed for slightly less than 100 yards per game last year, helped OSU average over 240 yards on the ground as the squad notched 37 rushing touchdowns in 2012. But all eyes will be on quarterback Braxton Miller, who ran for 106 yards per game last season on mostly designed runs. This year, Meyer is looking for a big jump in Miller's development as a passer after the dual-threat QB threw for 170 yards per game while completing 58.3 percent of his passes. While he did finish second in the Big Ten in passer efficiency, Miller is working to improve his accuracy and scrambling more effectively. This past December, quarterback specialist George Whitfield tutored Miller in California, so now the Buckeyes' coaching staff is excited to see Miller on the field for 15 practices as well as the Spring game on April 13.

2. Are there enough playmakers on the outside?

If Miller takes steps as a passer, does he have any playmakers around him? Philly Brown had a nice season last year with 60 catches for 669 yards, but he's the only sure thing out of a group of wide receivers and tight ends that will look to develop rapport with Miller this spring. And Brown himself has room to improve in order to become a consistent outside, down-the-field playmaker. There's a chance that Brown could end up moving inside depending on how Corey Smith adjusts to major-college life after transferring from the JUCO ranks, but he will not be on campus this spring. Neither will fellow incoming recruits like Jalin Marshall, Dontre Wilson and James Clark. So, Devin Smith, Michael Thomas, Evan Spencer and Chris Fields will try to move up the depth chart and be top receiving options. Another question is who will fill the tight end void left by Jake Stoneburner? Jeff Heuerman and Nick Vannett combined to catch 17 passes for 217 yards last fall. 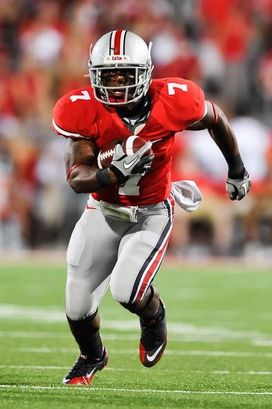 Jordan Hall has returned to Columbus after injuries derailed his 2012 season.

Senior Jordan Hall's 2012 season was derailed by injuries, so he earned a medical redshirt and a chance at redemption next fall. The once-projected starter at running back can be a major factor in this offense if healthy because the Buckeyes can use his speed and big-play ability in space. He now has a chance to take on the Percy Harvin role in this offense, which didn't really exist for the Buckeyes last year. Hall will play running back/receiver in this offense, and he certainly will be motivated to have a big final campaign in Columbus.

Ohio State's defense was not its usual self in 2012, as the offense quite often had to outscore teams on the Buckeyes' way to victory. When he arrived in Columbus, Meyer was quick to notice that the team needed defensive line depth, so he brought in Noah Spence, Adolphus Washington and Tommy Schutt. All three of those players showed glimpses last season, but the coaching staff is relying on all three to take big steps this offseason after the team lost John Simon, Johnathan Hankins and Nathan Williams. The defense did play better toward the end of the year, but only four starters return, including linebacker Ryan Shazier and cornerback Bradley Roby. How well the team's new starters gel early and by the start of Big Ten play could determine whether the Buckeyes land a BCS bid.

Eli Apple was one of the more athletically gifted cornerbacks in the Class of 2013, and he’s a smart player as well. He headlines probably the best set of defensive backs from February's class, which also includes fellow early enrollee cornerback Cam Burrows, who many feel could play early as well. The 6-foot, 185-pound Apple played both ways in high school, including wide receiver. That experience gave him very good ball skills, so he could become a playmaker for the Buckeyes on defense. With OSU losing Travis Howard, Apple has a shot at significant playing time with a big offseason.