Following the Wildcats’ scrimmage on Saturday, Phillips declared that fifth-year senior Mike Hartline, sophomore Morgan Newton and redshirt freshman Ryan Mossakowski are still competing for the right to line up under center in the season opener Sept. 4 at Louisville. 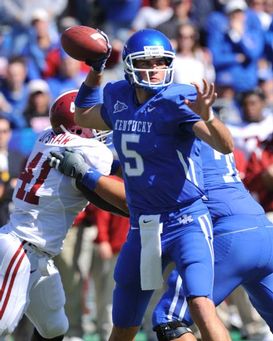 ICONMike Hartline is healthy after injuring his knee in the fifth game of last season.

I still don’t see how Hartline ultimately isn’t the starter heading into the season. He was the No. 1 last year before injuring his knee in the fifth game of the season. Newton then replaced him and went 75-of-135 for 706 yards and six touchdowns against three interceptions. Both have shown that they are capable of running the offense, but Hartline has the edge in experience.

While the 6-6, 210-pound senior has more interceptions (16) to touchdowns (15) in his career, his only real struggles in ’09 occurred in losses to Florida and Alabama.

Mossakowski, meanwhile, is a long shot in the race but has not been ruled out publicly.

All three had inconsistent afternoons on Saturday.

“Once they settled down, I thought all of them did a good job — and I hate to say this — managing the game,” Phillips told The Courier-Journal. “We want a quarterback that can win the game now for us. We've got to go figure out who gives us the best chance to win the game, and hopefully we'll be able to figure that out after watching this video.”