Camp matters: Texas may have to lean on its defense

While the quarterback competition will remain the main storyline until a starter is named, the reshaping of Texas’ defense under new coordinator Manny Diaz is just as important if the Longhorns want to rebound from a disastrous 5-7 campaign last fall.

His counterpart on the offensive side of the ball, Bryan Harsin, is busy trying to mold the Longhorns’ offense into a unit that resembles those he led at Boise State from 2006-10, when the Broncos averaged 41.4 points per game. But with so many questions on offense — the Longhorns still have issues at left tackle, receiver and running back — it may be up to Diaz's unit to carry the squad, at least early on. 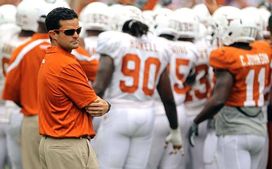 The former Mississippi State DC brought a strong pedigree to Austin, coming off a brilliant season guiding the SEC’s Bulldogs to a No. 21 national ranking in scoring defense and a No. 15 standing in rushing defense. The dramatic turnaround was in stark contrast to the team’s effort the season before his arrival, where the unit finished 71st in scoring defense and 62nd in rushing defense. His defense last fall held seven opponents to 20 points or fewer, including just 17 points to Gus Malzahn's Auburn juggernaut and 14 points to Denard Robinson and Michigan.

Longhorn players are excited to play in a system that is heavy on pressure and light on hesitation — less thinking and more playmaking.

Diaz believes in an attacking style, with lots of blitzing and multiple looks, which should help create more sacks and force more turnovers. Clamping down in the red zone is also a major point of emphasis. Diaz’s Mississippi State team finished ranked 13th in red zone defense last fall.

The Longhorns have some strong defenders returning, led by four-year starter Blake Gideon, a safety who is the leader of the secondary, as well as linebacker Emmanuel Acho and defensive end Alex Okafor. And keep in mind that the unit was stout last season, as is usually the case in Austin. But there are some concerns, as well.

Can 6-5, 295-pound senior defensive tackle Kheeston Randall take the next step and become the dominant run-stuffer that the team needs for the defense to be stout up front? While he was voted honorable mention All-Big 12 last season, he could rise to the next level with Diaz asking his tackles to run freely and attack instead of taking up blocks. However, Randall's effectiveness could be stunted if the Longhorns don't find a suitable tackle to play alongside him.

Another concern is the team's secondary. Can a youthful group of cornerbacks contribute early and be effective against pass-happy offenses?

One thing is certain, however. No matter which 11 players line up on defense this fall, you will recognize they are playing in a Manny Diaz defense — it’s controlled chaos, marked by a strong sense of confidence.