Can Iowa wrest Kouandjio away from Alabama?

Cyrus Kouandjio has a difficult decision to make.

The five-star offensive tackle from Maryland could sign with Alabama — one of the elite programs in the nation — and play in Tuscaloosa with his brother, Arie, a fellow lineman who redshirted in 2010. Or he could choose to go to Iowa, a school he visited last weekend, and play for a leader in Kirk Ferentz who knows offensive linemen as well as any coach in the country. 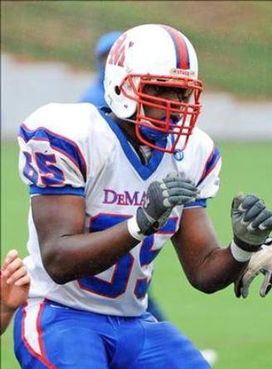 Where will Cyrus Kouandjio land on National Signing Day?

“I can't explain the feeling in words,” Kouandjio told Scout.com of his visit to the Iowa City campus. “It just felt good. It felt like home."

The 6-7, 320-pounder from DeMatha Catholic High School in Hyattsville, Md., is impressed with Ferentz and the number of linemen the Hawkeyes have sent to the NFL. In addition, Kouandjio's old high school teammate, freshman Marcus Coker, will enter the 2011 campaign atop Iowa’s depth chart at running back.

Still, Kouandjio will visit Auburn this weekend before making a decision on where he’ll sign a letter of intent. He has also visited New Mexico, but the Lobos are considered a long shot. Alabama, meanwhile, remains the odds-on favorite in the minds of most recruiting analysts.

However, Kouandjio has stated that no one should read anything into his brother's presence in Tuscaloosa. So does that mean Hawkeye fans can start planning their celebrations on Feb. 2 when Kouandjio dons the hat of the school of his choice?