Can Notre Dame salvage its season?

With its BCS dreams more than likely over following its home loss to USC last Saturday night, can Notre Dame salvage the 2011 season?

But only if head coach Brian Kelly can re-focus his squad after it took a step back in the loss to the Trojans, who dominated the Fighting Irish on both sides of the ball under the lights at Notre Dame Stadium.

And focus has never been more necessary than this week with Navy coming to town — the same Midshipmen squad that thoroughly exposed the Irish 35-17 last fall in Kelly's debut campaign. The Middies have won the last two and three of the last four games against Notre Dame, including last year's victory at New Meadowlands Stadium. 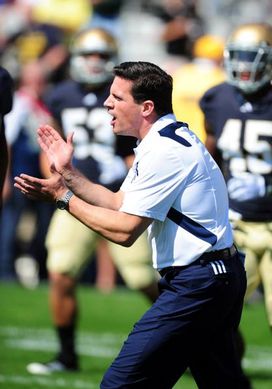 ICONBob Diaco's defense has a tough task at hand with Navy coming to town.

In that win, the Irish allowed the Middies to run for 367 yards, the most ever by Navy against Notre Dame, and Alexander Teich carried 26 times for 210 yards to become the first fullback in school history to rush for 200 yards in a game.

The good news for the Irish is that this isn't the same Navy team that handled them last season. The Midshipmen have lost five straight games (four of them by a total of eight points, however) and could possibly miss a ninth straight bowl game — they need to close with four straight wins to reach the postseason. In addition, Ricky Dobbs is no longer the quarterback, which is good news for the Irish because he accounted for three touchdowns in the victory last year.

Meanwhile, the Irish will have Tommy Rees at quarterback after Dayne Crist faced the Middies in 2010, and both Michael Floyd and Theo Riddick sat out the contest with injuries. And as we have seen this season, Notre Dame possesses one of the better offenses in the nation when it doesn't turn the ball over.

But, as always, it's going to come down to the Notre Dame defense against the ground-heavy Navy attack. The Irish are banged-up, however, as defensive end Kapron Lewis-Moore was lost for the season with a knee injury, and fellow end Ethan Johnson is still nursing an injury of his own. So freshmen ends Aaron Lynch, Stephon Tuitt and Chase Hounshell have had to grow up fast. But will they be ready for Navy's triple-option attack, which possesses the nation's third-ranked rush offense?

While Kelly and his staff must not overlook Navy this weekend, the rest of ND's slate consists of winnable games before the regular season finale at Stanford.

Following the game against Navy, the Irish travel to Wake Forest and play Maryland at FedEx Field before hosting Boston College. If they can win their next four games they will be sitting at 8-3 heading into the tilt with Andrew Luck and Co. If they can play turnover-free in Palo Alto, the Irish can compete with the Cardinal.

But even with a loss to Stanford, an 8-4 season would be a nice year for Kelly in Year 2 of his regime. While the Irish have played uneven and been inconsistent, finishing this season strong is critical as they look to build momentum heading into a 2012 campaign that features a brutal schedule from mid-September to late-October: at Michigan State, Michigan, Miami (Soldier Field), Stanford, BYU and at Oklahoma. They then finish the season at USC.

While many Irish fans were hoping for a BCS berth this year, a postseason bid to the Champs Sports Bowl would provide Kelly's strong freshman class with valuable practice time and an early jump on preparations for the 2012 season. The goal for Kelly has always been to build a consistent winner, and although there have been rocky times in his regime there is plenty to look forward to if you're associated with or a fan of the program.

But finishing strong in 2011 will go a long way toward having bigger aspirations in 2012.

And it all starts with taking care of Navy this weekend in South Bend.