Can Stave win the starting QB job at Wisconsin?

With two years of eligibility remaining, O'Brien will try to help the Badgers advance to a third consecutive Rose Bowl -- if he's able to sit atop the quarterback depth chart in the fall. 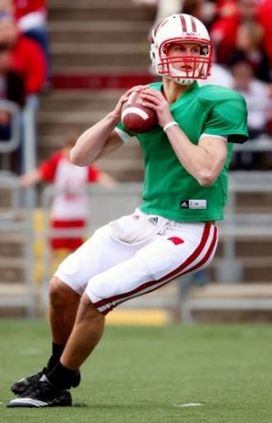 Joel Stave has other ideas.

Head coach Bret Bielema has maintained throughout spring practice that the redshirt freshman Stave has impressed him with his leadership and poise, and he will enter fall camp as the team's No. 1 quarterback. Stave has moved ahead of Joe Brennan for the No. 1 spot, but all expectations are for O'Brien to eventually pass the pair and start the season opener.

But O'Brien won't officially arrive in Madison for another month, so Stave will have more time to make an impression on coaches and players as well as further learn the intricacies of the offense. After the team's spring game last Saturday, he emphasized that the staff has said the competition is open and that he plans to continue to work hard throughout the offseason.

Bielema knew that he had to address the quarterback position this offseason with Curt Phillips and Jon Budmayr hurt. Incoming freshman Bart Houston is likely headed for a redshirt after injuring his shoulder. So O'Brien certainly knew he was being brought in to be the No. 1 guy. However, he must make a strong impression this summer and fall in order to leapfrog Stave, who has taken advantage of every opportunity this spring.

In his debut ACC season in 2010, O'Brien went 7-3 as a starter, passing for 2,438 yards with 22 touchdowns and eight interceptions. Running the Terps' pro-style offense, he looked poised to continue his success in College Park. However, Maryland began running the spread in 2011, and O'Brien struggled in the new scheme. He passed for 1,648 yards with 10 interceptions and seven touchdowns in nine games, losing his starting job to C.J. Brown before suffering a broken bone in his non-throwing arm in a loss to Notre Dame. Because the Badgers run a pro-style scheme, many expect O'Brien to return to 2010 form when he was named ACC newcomer of the year.