Can Wisconsin stop the bleeding?

Just two weeks ago, Wisconsin was the darling of the Big Ten and considered a strong candidate to play the winner of the LSU-Alabama game in the BCS national championship game.

But this is college football, a sport whose landscape changes when you least expect it.

Since sitting at 6-0, the Badgers have found life in the Big Ten and as a potential national power quite difficult on the road, where Bret Bielema's squad has dropped back-to-back games to Michigan State and Ohio State to take it out of national championship consideration. Most frustrating has been the fact that it lost in dramatic fashion both times, allowing long pass plays after rallying back from double-digit deficits in the fourth quarter. 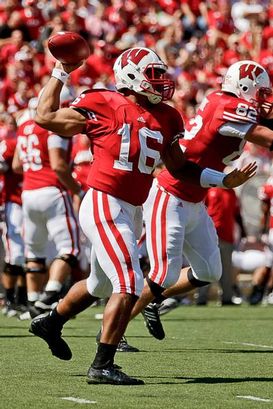 ICONWill Russell Wilson and the Badgers offense be in sync when they return home to play Purdue?

Although the losses tempered the enthusiasm in Madison, the Badgers still have a lot to play for when they host Purdue on Saturday at Camp Randall Stadium.

Wisconsin can still win the Leaders division because Penn State has a brutal remaining schedule, and the Badgers will have a chance to give the Nittany Lions one of their two needed losses. Ohio State also needs to lose once more because the Buckeyes own the tiebreaker over the Badgers, whose two road games remaining are winnable contests against Minnesota and Illinois.

But Wisconsin is going to have to clean up its special teams play after having punts blocked in each of the last two games, which led to touchdowns that made a difference. Bielema's squad also had a field goal blocked against the Spartans and gave up a long kickoff return to the Buckeyes. The Badgers also have been exposed on defense the last two weeks, particularly on third down as they allowed the Spartans and Buckeyes to convert over 50 percent of their combined third-down attempts. And while Paul Chryst's unit has managed to score points, their ball-control offense has been out of sync.

And as we saw the last two weeks, playing catch-up is not a winning formula.

This week against the Boilermakers, the Badgers will look to continue their home dominance behind the rushing of Montee Ball and James White as well as the dual-threat ability of quarterback Russell Wilson. And while the Badgers defense allowed 268 rushing yards against the Buckeyes, the Boilermakers have struggled on the ground the last few weeks. Danny Hope's team had just 42 second-half rushing yards against Illinois two weeks ago and gained only 89 yards last week at Michigan.

As long as the Badgers come out fast and avoid a hangover on Saturday, they should be able to take care of business at home.

And while the last two weeks may have been disappointing, the 2011 season can still be salvaged with a strong final month of the season.

It's even possible that a return trip to Pasadena is on the horizon.