As of now, Mississippi State, Florida State, Auburn and Ole Miss occupy the top four spots in the College Football Playoff selection committee's Top 25. But there is plenty of football left to be played.

If your favorite team isn't one of the four squads mentioned above, is it time to panic?

Absolutely not. Keep in mind that Auburn debuted at No. 11 in the first set of BCS standings last season, and the Tigers went on to play Florida State for the final BCS title.

So which teams outside of the Top 4 have a chance to ultimately end up in the four-team dance? Let's take a look at some contenders — outside of some obvious ones such as Oregon and Alabama.

Notre Dame: The Fighting Irish would have very likely checked in at No. 2 in this week's initial set of rankings if they had beaten Florida State in Tallahassee a few weeks ago. Instead, the Irish are sitting at No. 10. However, ground can be made up. The Irish have road games against Arizona State and USC as well as a home game against Louisville. Those would be solid victories and all of those contests are winnable. The one team that Brian Kelly and Co. may want to keep an eye on is Michigan State, which has just the one loss to Oregon on the road. When I did my latest postseason projections, I kept coming back to having the Spartans at No. 4 and the Irish at No. 5 after the SEC and Big 12 knocked themselves around a bit. However, one thing working in ND's favor is the fact that Michigan State's top remaining opponent — Ohio State — was rather low at No. 16. The Buckeyes certainly were penalized for their home loss to Virginia Tech in Week 2. So perhaps a win over OSU won't be that strong in the eyes of the committee, which could help ND. 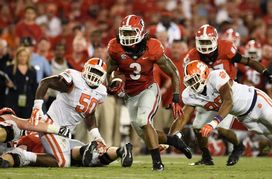 Todd Gurley will return for the Bulldogs' showdown with Auburn.

Georgia: The Bulldogs have just one loss, but it occured at the hands of South Carolina, which already has four defeats. Mark Richt's squad also hasn't exactly played a strong schedule up to this point, either, although the 'Dawgs do have a win over a really solid two-loss Clemson team. While a future FCS foe (Charleston Southern) won't help the strength of schedule, the Bulldogs have a crucial game against Auburn in a few weeks in between games against Florida, Kentucky and Georgia Tech. And Todd Gurley will be back for the game against the Tigers. If current No. 11 Georgia runs the table and wins the SEC East, there is no question it would earn a playoff bid with an SEC title game win.

Kansas State: The Wildcats sit at No. 9 in the current rankings because of their win at Oklahoma and their close loss at home to Auburn back in September in a game they could have won if not for some missed field goals. While the schedule the rest of the way is brutal — including road games against TCU, West Virginia and Baylor — the difficult slate is the reason why Bill Snyder's squad has a chance to enter into the top four. There is no Big 12 title game, which could either help or hurt a Big 12 squad this year. In the case of K-State, it may help because it has the "good" loss to Auburn. If the Wildcats play their usual sound, balanced football, they can be in the mix at the end of the year.

Michigan State: The Spartans sit at No. 8 and have what is considered a "good" loss in Eugene against Oregon, which started to pull away late in the third quarter of that game. Mark Dantonio's squad has a win over Nebraska, which checked in at a very respectable No. 15 this week. The Spartans have the game left with Ohio State, as mentioned above, and a possible rematch with Nebraska in the Big Ten title game. Because of expected cannibalization in the SEC as well as the possibility of the Big 12's leaders suffering another loss, the Spartans would be in good shape if they run the table and become Big Ten champion. While the criteria of the committee is still a little vague, being a conference champ is favored. But, as referenced in the Notre Dame item above, it will be interesting to compare MSU's resume with that of ND if the two teams run the table.

Arizona State: The Sun Devils have managed to put a blowout loss to UCLA in late September behind them and win games at USC and Washington as well as at home against Stanford. Todd Graham's squad is ranked No. 14 and has a favorable schedule the rest of the way: vs. Utah, vs. Notre Dame, at Oregon State, vs. Washington State and at Arizona. There are certainly very difficult games on the slate, but they are manageable as well considering how the defense has really come together despite entering the season with so many new starters. This could be a real wild card team at the end of the year.