The 2011-12 bowl season continues Thursday with the Champs Sports Bowl between Florida State and Notre Dame in Orlando.

The Seminoles are making their 30th straight appearance in a bowl game, the longest active FBS streak, while the Fighting Irish are trying to help Brian Kelly become the first Notre Dame head coach to win bowl games in each of his first two seasons. The teams are meeting for the seventh time, with FSU having won four of the previous six meetings, including a 37-0 win in South Bend in 2003.

When this game was announced, it was hard not to think back to the classic battle between these two programs in 1993, when the Fighting Irish beat the Seminoles in South Bend but were jumped by FSU for the No. 1 spot in the nation in the final poll.

Check out the awesome highlight package below, courtesy of YouTube user JB5GoIrish, of the '93 showdown.

The Seminoles certainly entered the 2011 season with very high expectations. In fact, some believed if they could knock off Oklahoma at home in mid-September that they could be on their way toward the BCS title game.

While the 'Noles lost a close contest to OU, Jimbo Fisher's squad didn't really recover from that defeat. And the major reason why they're relegated to this bowl is because of an anemic ground game and poor offensive line play. FSU is No. 99 in the nation in rushing offense and No. 111 in sacks allowed, and it's coming off of a win against Florida in which it gained only 95 yards of total offense. Frankly, it's stunning that the 'Noles have had so much trouble moving the football. And it's going to be more difficult against the Irish with senior running back Jermaine Thomas academically ineligible. Look for FSU to lean on true freshman Devonta Freeman, who leads the team with 531 rushing yards. And while quarterback E.J. Manuel has played well in bowl games the last two seasons filling in for Christian Ponder, it's a lot to ask any quarterback to win without much of a run game.

But coordinator Mark Stoops' defense has lived up to expectations, ranking No. 9 in the nation in sacks, No. 2 in rushing defense, No. 6 in total defense and No. 4 in scoring defense. Ends Brandon Jenkins and Bjoern Werner have combined for 13 sacks, though Notre Dame is No. 17 in the country in sacks allowed, so ND has protected the quarterback with consistency. 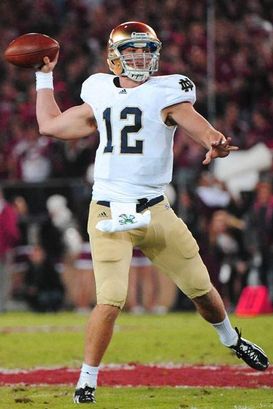 How much action will Andrew Hendrix see against the Seminoles?

Like the 'Noles, the Irish are also coming off of a season that disappointed many fans who thought the squad was primed for a BCS berth. But ND couldn't snag a signature win over USC or Stanford, and an 0-2 start made for an uphill climb.

Tommy Rees will start for the Irish at quarterback, but dual-threat Andrew Hendrix will receive plenty of playing time as well after replacing Rees in the regular season finale at Stanford. Getting receiver Michael Floyd the football will be the priority on offense, as he will end his career with many of the program's school records for receiving. But the Seminoles will make it a priority to limit Floyd's effectiveness, so tight end Tyler Eifert will have to take advantage of his matchups with FSU linebackers and safeties and help out Rees and Hendrix in the passing game. The rushing attack suffered a big blow when Jonas Gray was lost to a season-ending injury, so Cierre Wood must be effective in a lead role. But it will be difficult to find running room against a defense that is holding opponents to an FBS-best 2.3 yards per rush.

Defensively, the Irish may not have a problem against this subpar FSU offense because junior linebacker Manti Te'o leads a stout front seven, an area that has been much improved since the arrival of coordinator Bob Diaco with Kelly before last season. And the 'Noles don't scare many defenses with their passing attack.

Keep an eye on: Turnovers. Notre Dame enters the game 116th in turnover margin and has a minus-13 turnover differential. We've seen the Irish get killed all season by not protecting the football. A key turnover could help out an FSU offense that struggles to put points on the board.