One of the top quarterbacks in the Class of 2012 is ready to make his college destination known.

According to Jim Dunn of CBS Sports, Jameis Winston will choose between Alabama, LSU and Florida State. 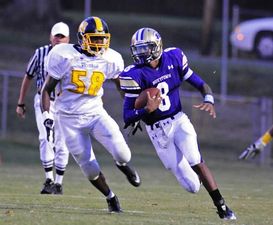 The Hueytown, Ala., signal-caller has maintained that he wanted to go to a school that would allow him to play both football and baseball. Winston is one of the best baseball prospects in the nation and has said that he would not pass up the money if he is selected in major league baseball’s first-year player draft next summer. However, it is possible that the switch-hitting center fielder/pitcher could play on the diamond collegiately while also playing football if he isn’t a first-round selection.

Because of his attraction to both sports, LSU and Florida State have been considered the frontrunners for the services of the 6-4, 200-pounder. However, Alabama remains in the hunt after making a late push.

During the exhausting recruiting process, Winston has also taken interest in UCLA and Oklahoma.

Coming off of a strong showing at the Elite 11 quarterback qualifier in Columbus, where he shared the stage with fellow top quarterback recruits Gunner Kiel and Zeke Pike, Winston is looking to improve on a wonderful junior campaign. In 2010, he completed 65.3 percent of his passes for 2,334 yards and 17 touchdowns against just four interceptions. In addition, he carried 128 times for 870 yards and nine more scores in helping lead his team to an 11-2 mark.

The talent is there on the gridiron. Major-college coaches already know that. But the question remains whether Winston will be able to eventually display that talent on Saturday afternoons — or if the dream of being a major-leaguer will be too strong to give up.