Clemson travels to Raleigh on Thursday night for an ACC Atlantic division clash with NC State at Carter-Finley Stadium.

Both the Tigers and the Wolfpack are coming off of bye weeks, and both teams enter their conference openers at 2-0.

Let's take a look at three things to watch in the clash between Dabo Swinney's Tigers and Dave Doeren's Wolfpack on Thursday evening. 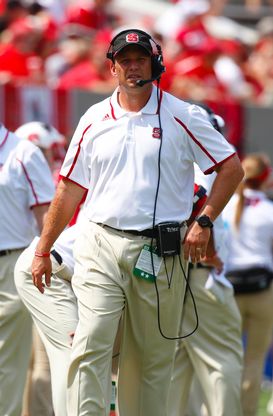 US PRESSWIRECan Dave Doeren continue the upset magic in Raleigh?

1. The spoiler role: NC State has relished the role of spoiler in the past. The Wolfpack have beaten the last three Top 10 teams they have played since 2005, and they will look to make it four in a row against the Tigers. Florida State was the victim in 2005 and 2012, while Clemson fell prey in 2011. The Tigers are currently No. 3 in the AP poll, but the Wolfpack are a big underdog in Doeren's ACC coaching debut. It is difficult to envision the 'Pack being able to limit the high-powered Tigers offense and notch a big upset, but it was also hard to believe they would beat Clemson and Florida State in the past. It should be a rabid crowd at Carter-Finley, so keeping them involved will be critical. The Wolfpack will be excited with a national Thursday night audience watching, but keeping their emotions in check is crucial. They are 9-9 on ESPN Thursdays, including 7-5 at home and 4-2 against Top 25 teams. Clemson, meanwhile, is just 2-9 on ESPN Thursdays. But the Tigers have won eight of nine in the series, with the loss coming two years ago in Raleigh.

2. The high-powered Tigers offense: In last year's Textile Bowl, Clemson's prolific offense put up 62 points against NC State's defense, highlighted by Tajh Boyd's ACC-record eight touchdowns and school-record 529 total yards. Doeren's squad has looked improved defensively in its first two wins this season, but this Chad Morris offense is a different animal than Louisiana Tech and Richmond. It is imperative that the Wolfpack force turnovers or get some key stops to at least stay in the game because their offense just won't be able to keep up if this game turns into a track meet. Clemson will be without Charone Peake, the team’s second-leading receiver who tore an ACL last week. So much more is expected of Martavis Bryant, as the Tigers need a strong No. 2 receiver to complement Sammy Watkins. On the ground, Roderick McDowell has been efficient as the new lead back.

3. Playing mistake-free: The Wolfpack committed four turnovers and 10 penalties in a two-point win over Richmond in Week 2. A mistake-filled game like that will lead to a blowout Tigers win on Thursday night. Colorado State transfer quarterback Pete Thomas has completed 67 percent of his passes, and he has two solid weapons at receiver in true freshman Marquez Valdes-Scantling and senior Rashard Smith. But the ground game is still a concern for the 'Pack. Can true freshman Matt Dayes do enough on early downs? If not, Thomas will face a lot of difficult third-down passing situations. And he has no touchdowns and three interceptions on the season playing in an offense not ideally suited to his strengths. Meanwhile, the Wolfpack defense used heavy pressure against Boyd two years ago to force three turnovers in their 37-13 victory over then-No. 7 Clemson in its last visit to Carter-Finley. This season the Wolfpack lead the nation in fumble recoveries with six, so we'll see if the Tigers can protect the football.

* NC State starting left tackle Rob Crisp is questionable with an upper body injury. The senior is the team’s best offensive lineman, and it could be very good news for Clemson defensive end Vic Beasley if Crisp does not play. Beasley had three sacks and a forced fumble in last year's win over the Wolfpack. He was also disruptive in the Tigers' 38-35 season-opening win over Georgia. If Crisp misses the game, NC State will have to contain Beasley by committee, including chipping by its running backs.