Clemson looks to remain in the Atlantic division race when it travels to Winston-Salem on Thursday evening for an ACC clash with Wake Forest at BB&T Field.

The Tigers are coming off of an easy 21-point win over Virginia Tech, while the Demon Deacons were able to steal a 16-10 win at Virginia.

Dating back to 1998, Clemson is just 1-9 against ACC foes on Thursday night. Can Wake Forest pull the upset and extend the Tigers' weeknight woes? The Deacs are 4-0 on Thursday night ESPN games.

Let's take a look at three things to watch in the clash between the Tigers and the Demon Deacons on Thursday. 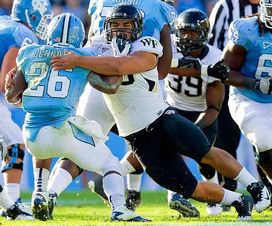 When Nikita Whitlock is healthy, he's one of the best defenders in the ACC.

1. Containing the prolific Tigers offense: Wake Forest has been a much-improved defense the last few games after a rough start to the season. With nose guard Nikita Whitlock healthy, this is a different-looking unit. Keep in mind that he entered the season with 24.5 career tackles for loss. In the last three games, the Deacs are only giving up an average of 308.7 yards per game. The problem has been on offense, and that unit will need to improve because Clemson's offense will be tough to stop. The unit averages 40.8 points per game, led by prolific dual-threat quarterback Tajh Boyd. But Boyd has been held in check as a runner this season, and he hasn't been as crisp through the air. Still, running back Andre Ellington and explosive receivers Sammy Watkins and DeAndre Hopkins give Boyd plenty of playmakers against this Wake defense.

2. Campanaro vs. the thin Tigers secondary: Wake Forest junior wideout Michael Campanaro returns to action after missing two games with a broken hand. In five games, he has 38 receptions for 429 yards and three touchdowns, and he is one of the best receivers in the ACC. He also is a vital component to Wake's passing attack. Last season in the meeting at Clemson, he had nine catches for 72 yards and added a 50-yard punt return touchdown. The Clemson secondary, meanwhile, continues to be banged-up. Sophomore cornerback Bashaud Breeland will miss the game with a groin strain, which leaves senior Xavier Brewer, sophomore Garry Peters and redshirt freshman Cortez Davis as the only corners with any amount of experience. Junior Darius Robinson will miss the rest of the season after fracturing his ankle last week against Virginia Tech. The defensive backfield is so depleted that sophomore receiver Adam Humphries could see action at corner.

3. A Wake hex?: There is reason for the Tigers to be concerned about facing Jim Grobe's Demon Deacons. The Tigers are just 2-3 in their last five visits to Winston-Salem, and Wake nearly pulled a huge upset last year at Memorial Stadium until a 43-yard field goal as time expired lifted Clemson to a 31-28 win. While the Demon Deacons have some stinkers every year, they more often than not get up and play their opponent tough in big games. Also think back to four years ago when the Tigers visited Wake Forest and dropped a 12-7 contest that essentially sealed the fate of Tommy Bowden, who resigned four days later. Then-receivers coach Dabo Swinney was named interim head coach. Since then, however, Wake Forest has been unable to beat Clemson.