Clemson kicked off spring practice on Friday with a new offensive coordinator and renewed energy around the program following a stellar recruiting class.

Let’s take a closer look at Dabo Swinney’s Tigers as they get a jump on preparing for the 2011 season. 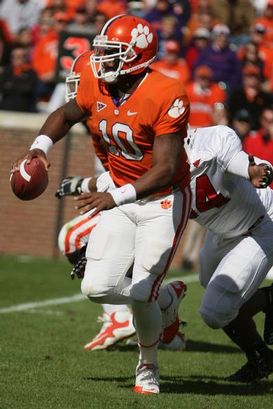 After a lengthy search for a new coordinator, the Tigers brought in Chad Morris to revamp an offense that struggled to move the ball and score points in 2010. Morris helped Tulsa finish fifth nationally in total offense in his one season, and the former Golden Hurricane offensive coordinator hopes that his up-tempo offense will be just as effective in the ACC. A disciple of Auburn’s Gus Malzahn, Morris’ no-huddle attack certainly should be more fun to watch than the stagnant unit from last fall. Morris has stressed that better conditioning for his linemen and skill position players will be of utmost importance.

The Kyle Parker era is over

Kyle Parker will officially move onto a full-time career in baseball, so it’s up to Tajh Boyd to step up under center. Boyd possesses a strong arm and has the athleticism to be effective in this offense. Tigers fans were able to get a glimpse of his skill set when he produced two touchdowns in the team’s bowl loss. This spring will be all about continuing to absorb the new offense. However, we won’t really find out about his decision-making until the fall. But the talent is there. The question is will the results be when it matters most?

While a lot of pressure is on Boyd to run the new offense, he’s going to need to have playmakers around him in order to excel — something the Tigers lacked last season.

Andre Ellington should enter the fall atop the depth chart at running back, but the 5-10, 180-pounder will miss spring practice as he recovers from a toe injury. However, he should be ready to start running again this week. Jamie Harper has moved on, so the spring reps will be split among D.J. Howard, Demont Buice and Roderick McDowell. Having plenty of capable backs can only help this offense as it moves forward.

While everyone is excited about the incoming crop of receivers, they won’t be on campus for spring drills. Thus, it will be important for receivers Joe Craig, Brandon Ford, Marquan Jones and Bryce McNeal to make an impression and help the offense grow before the team’s highly touted receiving class arrives on campus. 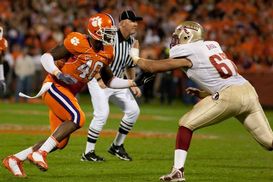 ICONAndre Branch will try to help offset the loss of Da’Quan Bowers.

With all the talk about the new offense, how will the defense fare without potential top-five NFL draft pick Da’Quan Bowers? The unit was exceptional last season, but Bowers was one of the main reasons as he led the nation in sacks with 15.5 as well as tackles for loss at 26. Tackle Jarvis Jenkins was also a disruptive force in the middle. Defensive ends Malliciah Goodman and Andre Branch will be looked upon to help offset the loss of Bowers, but coordinator Kevin Steele will look at all options.

In addition to concerns on the line, the Tigers lose three starters from the secondary: safety DeAndre McDaniel and cornerbacks Marcus Gilchrist and Byron Maxwell. However, Swinney brought in a nice haul of talented defensive backs in 2010, including Marcus Robinson, Martin Jenkins and Garry Peters. Can the Tigers find defensive playmakers from last year’s group? There are plenty of capable players to step in, many of whom redshirted last season.

Clemson experienced its first losing season in 11 years last season, but the ACC continues to remain wide open for the most part. If they withstand an early test against Auburn and get off on the right track in league play, perhaps the Tigers can seriously contend for their first ACC title since 1991. However, first thing’s first: Swinney, Morris and the rest of the coaching staff want to get off on the right foot this spring, because there remain more questions than answers at this point. The Tigers hope to find out more about where they stand during their annual spring game on April 9.