Kentucky head coach Joker Phillips may want to follow the lead of Butch Davis and a handful of others and ban his players from Twitter. After Randall Cobb’s outburst on the microblogging site, it might be a good idea. 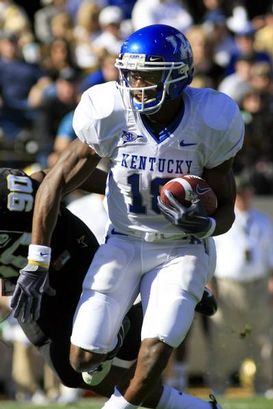 ICONWill Randall Cobb be Tweet-less the rest of the season?

The Kentucky wide receiver, who caught the game-winning touchdown pass from quarterback Mike Hartline in the team’s upset win over South Carolina Saturday night, was apparently upset by how he and his Wildcats teammates were treated by the home crowd.

Cobb wrote in a series of Tweets Sunday afternoon, “To all the fans: loved seein' Yall come late, love hearing Yall tell us we suck during the game, love that we have to play against our own fans too! Love that we can't pack the house when we play the #10 team in the nation… It means that much more to me. I love my team!”

He also noted that he and his teammates have each other’s backs and that, “The rest of Yall can get ready for bball season!”

The tweets have since been deleted.

Many of those in attendance this past week — especially those in the student section — arrived late, and fans booed several times as South Carolina grabbed a 28-10 first-half lead.