Earlier this offseason I presented my top contenders for the very first College Football Playoff. At the time, my projections included Florida State battling Ohio State and Auburn meeting Oregon.

Since then, I have replaced Auburn with Alabama. But these are still early projections.

Today, as we inch closer to the start of the new season, I wanted to take a look at some under-the-radar programs that could contend for a playoff berth if things break the right way in 2014.

Wisconsin: Gary Andersen had a strong first season replacing Bret Bielema in Madison, going 9-4 in 2013. The ground game remained sound, and the defense was really strong. But that defensive unit has lost a lot of talent, so Wisconsin may have to rely on its offense a bit more in 2014. We know the rushing attack will be strong behind Heisman Trophy-contending running back Melvin Gordon and Corey Clement, but the team desperately needs improvement at quarterback whether Joel Stave or Tanner McEvoy wins the starting job. Schedule-wise, the Badgers are sitting pretty if they are able to get past their season opener against LSU in Houston. The Badgers miss Michigan State, Ohio State, Michigan and Penn State on the Big Ten schedule. A win over the Tigers in Week 1 could set the stage for a CFP run because Iowa is the toughest league roadie. Of course, a Big Ten title game could loom.

Georgia: The Bulldogs are loaded on offense. New starting quarterback Hutson Mason will be surrounded by tons of skill players such as wide receivers Malcolm Mitchell and Justin Scott-Wesley as well as running backs Todd Gurley and Keith Marshall. While it's tough for any program to lose a player such as Aaron Murray, who re-wrote the SEC record book, the senior Mason looked very comfortable late last season as well as this past spring. The biggest reason the 'Dawgs are even considered overlooked for the playoff, though, is because of major questions on defense. However, the addition of new coordinator Jeremy Pruitt should pay immediate dividends. This is a unit that simply must be much better after allowing over 30 points per game, and it will start with a strong linebacker corps led by Jordan Jenkins. But the defensive line and secondary will tell the story of the 2014 ‘Dawgs. This team ended up losing four games by five points or less in 2013. Will improved health and what should be an improved defense be the difference this year? The schedule isn't exactly easy, but the Bulldogs do avoid Alabama, LSU and Ole Miss, and they get Auburn at home. The roadie at South Carolina looms large, and the 'Dawgs host Clemson in Week 1. 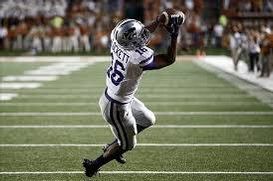 K-State WR Tyler Lockett is one of the most electrifying players in the nation.

Kansas State: Things looked disastrous for Bill Snyder's squad last fall after stumbling out of the gate with a loss to FCS squad North Dakota State and a three-game skid that left it 2-4. But the Wildcats weathered the storm and won six of their final seven to close out 2013. Big things are expected from Jake Waters, who will have a full season as the starter under center as well as receiver Tyler Lockett, who is one of the most explosive and productive players in the country. Defensively, end Ryan Mueller is a stud. In terms of the schedule, the 'Cats have a chance to make noise on the national landscape with a win on September 18 at home against BCS title runner-up Auburn following a bye week. However, road games still loom at Oklahoma and Baylor. It will be interesting to see how the selection committee handles a team from the Big 12, which does not hold a conference championship game. Will K-State make it interesting by the end of the year? Never discount Snyder.

Clemson: I wrestled with even putting the Tigers on this list because of their increased national presence, but then I thought back to their disastrous home loss to Florida State last season as well as their loss to rival South Carolina. They still haven't quite cracked through, but this could be the year for Dabo Swinney's bunch. Replacing quarterback Tajh Boyd as well as receivers Sammy Watkins and Martavis Bryant won't be easy, but this is still a Chad Morris offense. And rising senior Cole Stoudt is more than capable of running the show. Most intriguing about the Tigers is the fact that the defense could actually overshadow the offense in 2014. End Vic Beasley and linebacker Stephone Anthony are the standouts of the unit. The schedule isn't easy, but games at Georgia and Florida State as well as the home contest against South Carolina won't leave any doubt about strength of schedule. Depending on how things play out, a one-loss ACC champ could find itself in the playoff mix.

Iowa: The Hawkeyes put together a solid 2013 campaign, recording an 8-5 mark one season after finishing 4-8. They bring a lot of pieces back this fall, although their elite linebacker corps is gone. Iowa is often the target of a lot of jokes nationally because of its conservative offense, but this team could have a sterling record in 2014 because of the schedule. The Hawkeyes have an incredibly manageable slate, as their toughest Big Ten road game is at Minnesota. They host Wisconsin and Nebraska back-to-back weeks in late November, so having a strong run game and being turnover-free under center could deliver a dream season in Iowa City. However, a tricky late September game at Pittsburgh and a potential Big Ten title game will be obstacles.

Notre Dame: I chatted recently with Kevin O'Connell, a former star quarterback at San Diego State who often works with quarterbacks coach George Whitfield, Jr. O'Connell gave his thoughts on some of the signal-callers he's worked with this offseason, one of whom was Everett Golson, who is back in South Bend after missing the 2013 campaign. O’Connell said he was “so impressed with his overall skill set.” Golson is bigger and stronger for the physical grind of a full season, and O'Connell said his footwork was constantly improving during his workouts, leading to better overall mechanics. Despite the presence of Malik Zaire, who had a strong spring in South Bend and remains in the mix for starting duties, O'Connell said he can’t see a scenario in which Golson doesn’t win the starting job. The offense has more playmakers for a unit that head coach Brian Kelly knows must step up to help out a defense that lost some key pieces. Can new defensive coordinator Brian VanGorder dial up enough pressure on opposing quarterbacks? The problem for the Fighting Irish is that the schedule is brutal. While they host Michigan, Stanford and North Carolina, they have to play at Florida State, Arizona State and USC. It is the ideal scenario for the strength of schedule factor, but it would be difficult to even go 11-1 against that slate. However, if the Irish are able to accomplish that feat, a berth i n the playoff could be on the table.

LSU: Les Miles once again is fielding a squad that lost a ton of underclassmen to the NFL. The offense will be reliant on a lot of young players, including the immensely talented running back Leonard Fournette and wide receiver Malachi Dupre. And the Bayou Bengals could start a true freshman quarterback for the first time in their history, as Brandon Harris is really pushing Anthony Jennings. Coordinator John Chavis will need to develop all of the top talent that the program has been able to bring in the last few years on the defensive side of the ball, but never discount a Miles team even if it's young.