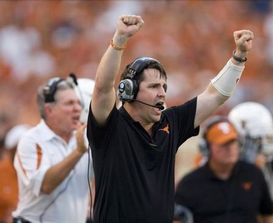 Before his new Florida gig, Will Muschamp was making some serious dough at Texas.

According to the newspaper, the number of assistants making $250,000 or more is up from at least 106 in 2009 to 132 this season. Fifty-one of those assistants are in the SEC, while only three of the 132 are on the staffs of non-AQ teams.

Here's a look at this season's highest-paid assistants.