Controversy to remain in post-BCS era

While details of the new College Football Playoff continue to be discussed, one thing remains certain for the future of college football's postseason.

Controversy will remain a big part of the equation, which is actually par for the course for the country's most popular sport outside of the National Football League. And CFP executive director Bill Hancock is well aware of the impending drama. 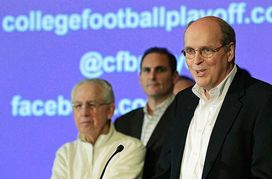 Despite the new four-team playoff replacing the Bowl Championship Series to determine major college football's national champion, the selection of the teams for the semis will seemingly be open for debate as much as ever.

On Wednesday in Irving, TX, the commissioners who oversee the CFP laid out the scenarios for when selection committee members should recuse themselves from discussing the credentials of potential playoff participants, and the commissioners also announced that the committee would meet several times in person and release weekly rankings leading up to the final rankings — which is the only set that should matter, of course.

The committee's first Top 25 will be released on October 28, which essentially does nothing for the top four teams at that time even if those four squads remain unbeaten the rest of the way. But this sport loves its polls, of course. The rankings will be BCS-like in the sense that those rankings only paint the picture of the landscape at that time, and voters are not expected to take into account the previous week's poll when working to put together the next one. But won't that be difficult for committee members not to do?

Nonetheless, expect plenty of debate like we had during the BCS era when the rankings come out on Tuesdays. Yes, the rankings will be released on Tuesdays and not Sundays.

The selection committee will meet in-person every Monday and Tuesday starting in late October to compose the first of six Top 25 polls before the final rankings are released on December 7. When these rankings are released on ESPN, the event will most certainly be watched by the same followers of the sport who tuned into the weekly shows that revealed each set of BCS standings over the years. But will the selection process be more transparent because of the weekly airings? Possibly, but that remains to be seen. Jeff Long, the Arkansas athletic director and chairman of the selection committee, is supposed to explain the rankings process each week on the show. If that is the case, we should expect to hear explanations on how and why the résumés for teams have changed.

While it is said that the committee will go through a process similar to what the NCAA's basketball committee goes through each year, Long and Co. are embracing the debate aspect of what weekly rankings will offer. Of course, in college hoops, there is one bracket put together and it is released after the conference tournaments put a bow on the regular season. It's a lot different when trying to select four football teams with a much-smaller sample size and not 68 basketball squads.

The one major issue in terms of the national perception of the committee involves the recusal policy. Each of the 13 members of the committee will have to leave the room when the discussion involves a school where he or she has an immediate family member receiving compensation or has a professional relationship with that school. The policy could adapt for "special circumstances," but as of now being a past employee/alma mater or having a conference affiliation does not fall into this category.

So, for example, Condoleezza Rice cannot be in on discussions involving Stanford, and Long can't discuss Arkansas. However, Tyrone Willingham can be in on talks regarding Stanford, Notre Dame and Washington, three places in which he was a head coach.

We'll see how this all works out, and all eyes will be on the process — especially in its first year.

But there's no doubt that controversy has not left our great sport. Not one bit.