The 2011-12 bowl season continues Friday night with the Cotton Bowl between Kansas State and Arkansas in Arlington, Texas.

The Wildcats have been revived for the second time under head coach Bill Snyder, who has taken K-State to its second straight bowl game after the team did not go to the postseason from 2007-09. Amazingly, this will be the 14th bowl in K-State history, and Snyder has been the coach for 13 of those games. Meanwhile, Bobby Petrino has taken the Razorbacks to three straight January bowl games, including last year’s BCS appearance in the Sugar Bowl. 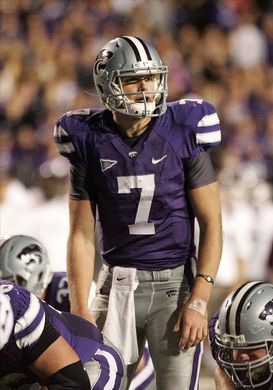 The Wildcats had one of the strongest arguments for a BCS berth, but they were left out of the Sugar Bowl and instead will face off with the Razorbacks in an intriguing Big 12-SEC matchup. Kansas State doesn't play the prettiest brand of football, but their style works -- and works very well. Snyder performed perhaps his best coaching job yet, and dual-threat quarterback Collin Klein was the best player in the conference not named Robert Griffin III. Klein rushed for 1,099 yards and led the Big 12 with 26 touchdowns on the ground -- staggering numbers for a QB. He's also improved his accuracy as a passer despite having a wacky delivery, throwing for 1,745 yards. He's essentially a one-man show in this offense, so the Hogs will have difficulty slowing him down even though they know he's going to carry the football a lot. Additionally, running back John Hubert needs just 67 more yards to reach 1,000 this fall, so ball control will be huge for K-State, which has turned the ball over just 13 times this year.

Defensively, coordinator Chris Cosh has implemented Snyder's vision for a tough defense, and it's led by former Miami transfer Arthur Brown, a high-energy linebacker who runs well east to west. This team was very stout against the run this fall, which was a change from last year. They are susceptible to the pass, however, so the secondary will be tested by the Hogs' prolific passing attack. However, cornerback Nigel Malone did pick off seven passes this fall.

The Razorbacks, meanwhile, didn't quite match up to the caliber of play of LSU and Alabama this season, suffering their only two losses to the Tigers and Crimson Tide. They didn't often play up to their talent level, looking sluggish is close wins over Ole Miss and Vanderbilt, and they needed to storm back to beat Texas A&M as well. But the Hogs still won 10 games. Quarterback Tyler Wilson took advantage of his deep and talented receiver corps to help the unit finish first in the SEC in total offense at 445.8 yards per game. Despite the 41-17 loss to LSU the day after Thanksgiving that eliminated any chance of them sneaking into the BCS national championship game, the Hogs hit their stride in a 44-28 home win over South Carolina and played their best football in the month of November.

The loss of running back Knile Davis to a season-ending ankle injury made this offense a little one-dimensional, but the ground game picked up a bit in the second half of the year. Dennis Johnson showed that he could be an adequate fill-in for Davis, and a sound rushing attack will open things up even more for Wilson against the Wildcats tonight.

Defensively, Arkansas struggled against the run this season, so containing Klein is the biggest concern. The Hogs finished the regular season ninth in the SEC in rushing defense, so they'll have their issues in trying not to allow Klein to extend drives with his legs, which would tire out their defense.

Keep an eye on: Big plays through the air. In its lopsided 58-17 loss to Oklahoma, Kansas State was burned by long touchdowns. And the Wildcats secondary is their weakness. Wilson and Co. have the capability of producing big plays, so K-State must not allow the Hogs too many long completions or quick scores because they don't have a high-octane offense to trade touchdowns with the Razorbacks.