Could Wulff save his job with an Apple Cup win?

Just looking at his record, one would argue that Paul Wulff is not long for the Washington State head-coaching gig.

The Cougars are just 9-39 under Wulff, the worst record over a 48-game stretch in school history. 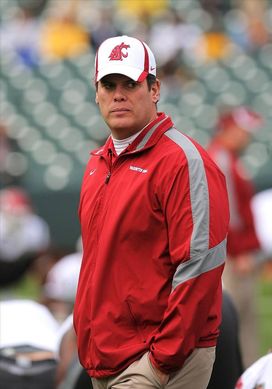 ICONWill Paul Wulff be in Pullman for the 2012 season?

With renovations and expansion on the horizon at Martin Stadium, Wazzu could be looking for a fresh face of the football program.

At Tuesday's Pac-12 weekly teleconference, Wulff was asked if he considered the possibility that he could be days away from coaching his final game in Pullman.

"I don't think like that," Wulff said. "We've got a great, young football team. This is a great young team that's getting better and better all the time."

While the team is improved from previous seasons, the Cougars (4-7, 2-6 Pac-12) will once again miss the postseason. And their fortunes have soured after a promising 3-1 start to the season.

However, Scott M. Johnson of the Everett Herald wonders if Wulff could be brought back in 2012 if he is able to spring an upset win over rival Washington in Saturday's Apple Cup.

"An exciting win over the Huskies would leave WSU one victory short of bowl contention while matching Wulff's win total from the previous three seasons combined," Johnson argues. "It would also give the Cougars a 2-1 record down the stretch -- all against bowl-eligible teams -- with only an overtime loss tainting the mark. And Wulff would carry a respectable 2-2 mark in Apple Cup games during his tenure."

Despite playing three quarterbacks this season, Wazzu has moved from 115th in total offense last season to 36th this fall, and the Cougars have improved in total defense from 115th to 82nd.

Will that improvement be enough to buy Wulff another season, especially with a win against the rival Huskies?