Crowton may not have a future at LSU

At some point, change is necessary.

When an offense finishes 11th and 12th in the SEC in total offense the last two seasons, something’s not working. And someone has to take the blame.

LSU ranks 107th out of 120 FBS teams in passing offense in 2010, and there’s only one other school that has tossed fewer than its seven touchdowns — Army. 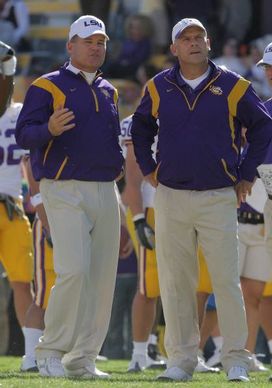 ICONWill Les Miles and Gary Crowton be working together in 2011?

So it’s understandable why Tigers head coach Les Miles did not give a ringing endorsement to offensive coordinator Gary Crowton.

“I’ve got to be real honest with you, I don’t want to talk about that,” Miles replied when asked about Crowton’s status beyond the team’s bowl game. “Endorsement, no endorsement — all those things are really without relevance at this point to me. This is about preparing a team for a bowl game, period. I think our offense has gotten better. And I think that our team is maturing.”

Crowton has felt the wrath of both Tigers fans and local media throughout the past two seasons as the Bayou Bengals have consistently been unable to field a steady offensive unit. While quarterbacks Jordan Jefferson and Jarrett Lee have had their moments, they’ve also struggled to move the ball down the field through the air week in and week out.

Crowton said Wednesday morning that he expects to remain the team’s offensive coordinator for the final year of his contract that runs through the 2011 season.

The Tigers will learn their bowl fate — likely the Cotton Bowl or the Capital One Bowl — by Sunday after finishing the regular season 10-2 and No. 10 in the BCS standings.