Da'Rick who? Patterson has star power at Tennessee

Along the way, all of the questions about the Vols' depth at receiver following the departure of all-SEC performer Da'Rick Rogers were answered with an explosive performance from Cordarrelle Patterson. 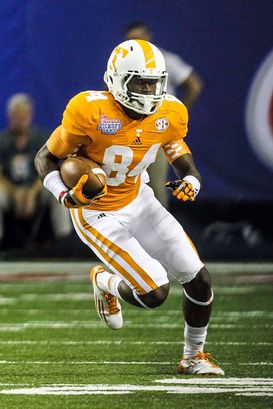 US PRESSWIRECordarrelle Patterson broke out in a big way in his Tennessee debut.

Quarterback Tyler Bray found Patterson, Justin Hunter and Zach Rogers for several big plays to pace the Vols to an opening win. Hunter, who was returning from a torn ACL, had nine catches for 73 yards.

But the emergence of Patterson was the most significant development for Dooley and offensive coordinator Jim Chaney. The 6-3, 200-pound junior-college transfer scored the first Tennessee touchdown by hauling in a 41-yard pass from Bray. Most impressive was that he beat N.C. State star corner David Amerson, who struggled in the contest but has been labeled a first-round NFL draft pick by many analysts. Amerson was also beat by Rogers for a 72-yard touchdown.

Patterson showed his athleticism again later in the first quarter on a reverse and outpacing Wolfpack defenders for a 67-yard score. He finished the contest with six catches for 93 yards and two touchdowns as well as two carries for 94 yards.

Bray, meanwhile, finished the night by completing 27 of 41 passes for 332 yards and two touchdowns. While the team still has some issues to work on before getting into the meat of its schedule, it was a huge win for Dooley and a program that missed the postseason in 2011.

And it was a huge night for a rising receiving star who landed on the national scene in Week 1.