D.C.'s large media market will be an adjustment for Leach

It won’t be very long before Mike Leach realizes that he isn’t in Lubbock anymore. The Washington, D.C., area is a different animal.

Despite his litigation against Texas Tech unresolved — the former Red Raiders head coach is seeking $10 million for the final four years of the contract he was fired from — multiple media outlets are reporting that Leach will be the next head coach at Maryland. 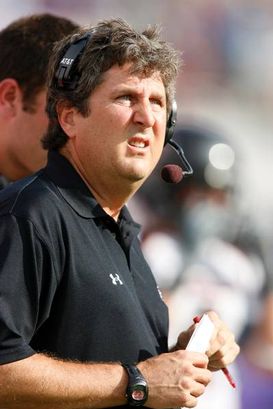 ICONFormer Texas Tech head coach Mike Leach is reportedly on his way to coach at Maryland.

Athletic director Kevin Anderson asked Ralph Friedgen to retire after coach-in-waiting James Franklin took the Vanderbilt job late last week. The Fridge has not agreed to do so and will reportedly be bought out of his deal.

Friedgen, the ACC coach of the year, led Maryland to an 8-4 season and a berth in the Military Bowl a year removed from going 2-10. He went 74-49 in 10 seasons at Maryland with seven bowl berths, including an appearance in the Orange Bowl in his debut campaign.

Working under a new athletic director with dwindling attendance at a refurbished stadium, along with his desire for a new long-term contract, ultimately spelled doom for Friedgen. Now, Terps fans will see the program go in a new direction — one that certainly will be interesting to watch if the Leach reports are true.

While he was at Texas Tech, Leach didn’t allow more than two players to talk to the media on a weekly basis, something that irked a lot of players during his tenure.

He’ll be in a much bigger media market, and with that comes greater scrutiny when things don’t go smoothly. How will Leach, a unique character who famously has a fascination with pirates, react to adversity?

There’s no question that the Terps will score points under Leach, the architect of an exciting spread passing attack. The Red Raiders led the nation in passing six of Leach’s final eight seasons in Lubbock. He also left as the winningest coach in the program’s history (84-43) and never had a losing record.

But he’s also the same coach who blamed a Red Raiders loss in 2009 on his players’ “fat little girlfriends.”

Terps fans, welcome to the anti-Friedgen.