Defense is a priority at Georgia this spring

Georgia opened spring practice this past Saturday following a 2012 season in which it claimed the SEC East crown and nearly knocked off eventual BCS national champion Alabama in the SEC championship game.

The Bulldogs return every starter but one from last year on offense. However, head coach Mark Richt's squad returns just three starters on defense, so the focus this spring will be on the defensive side of the ball.

Let's take a look at some of the biggest storylines for the 'Dawgs this spring as they start early preparations for the 2013 season.

Will youth be served on defense? 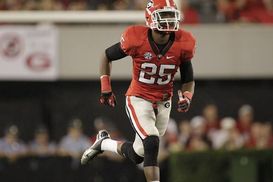 US PRESSWIREJosh Harvey-Clemons will be counted on to step in and make an impact on defense.

It's not a stretch to state that no other unit in college football has lost as much talent as the Georgia defense. Linebackers Jarvis Jones, Alec Ogletree and Cornelius Washington, defensive tackles John Jenkins, Kwame Geathers and Abry Jones, safeties Bacarri Rambo and Shawn Williams, and cornerback Sanders Commings are all departing Athens. That's an incredible amount of talent lost from coordinator Todd Grantham’s 3-4 unit. In all, the ‘Dawgs lose 12 players on defense who started at least two games for them last season.

There are still a lot of talented defenders on this roster, though, including defensive ends Jordan Jenkins, Garrison Smith and Ray Drew. Jenkins could be a future All-American, as the rising sophomore could be the next standout pass-rusher for this program after registering five sacks and eight tackles for loss playing opposite Jarvis Jones last season.

While the 'Dawgs lose all four starters from their secondary, last year's rash of suspensions and injuries allowed their backups to log quality playing time. Junior cornerback Damian Swann is a likely all-SEC performer moving forward, and there is safety depth with Corey Moore, Connor Norman, Marc Deas and Josh Harvey-Clemons, who will be moved around all over the field after excelling on special teams in 2012. Still, who will start opposite Swann? And will the losses of Bacarri Rambo and Shawn Williams be too much to overcome at safety? Richt and Grantham would love to have a better feel of what they have in the secondary after the team's spring game on April 6.

Star quarterback Aaron Murray elected to come back to Athens despite there being a weak quarterback class in this year's NFL Draft. Because the Bulldogs know what they are getting with the senior signal-caller, expect Murray to be protected this spring. He passed for 3,893 yards and 36 touchdowns, completing 64.5 percent of his passes last year. Backup Huston Mason should get plenty of reps to show the coaching staff that he could run Mike Bobo's system efficiently if disaster strikes and Murray has to miss any time in the fall.

The 'Dawgs did not miss a beat without Isaiah Crowell in the backfield last year, as Todd Gurley and Keith Marshall combined for over 2,000 yards rushing as true freshmen, with Gurley earning All-SEC honors with 1,385 yards and 17 touchdowns and Marshall adding 759 yards and eight scores. All five starting offensive linemen return, along with productive receiver Malcolm Mitchell.

— The Bulldogs have 13 early enrollees participating in spring practice, which is an incredibly high number even for the SEC. A few names to keep an eye on: former JUCO nose tackle John Atkins, former JUCO wideout Jonathon Rumph and safety Tray Matthews. These players could make an immediate impact.

— Tavarres King and Marlon Brown are gone, so a lot of pressure is on Mitchell to pick up most of the slack at receiver. This is a big offseason for Chris Conley, Rantavious Wooten and Justin Scott-Wesley, as they try to insert themselves into the rotation. Michael Bennett is expected to return from knee surgery this fall.

— Without an experienced option at nose tackle in the 3-4, 335-pound redshirt freshman John Taylor and Atkins will likely get the first crack at the spot. The Bulldogs have a new defensive line coach in Chris Wilson, who was hired from Mississippi State to replace Rodney Garner, who left for Auburn. The Bulldogs finished 12th in the SEC in rushing defense, and there won't be much improvement if the play doesn't get better in the middle.