Denard: 'I could take' Bolt

Denard Robinson believes he is golden. As in ready to take down an Olympic gold medalist.

The Michigan quarterback believes that he can beat track and field sprinter Usain Bolt in a race. 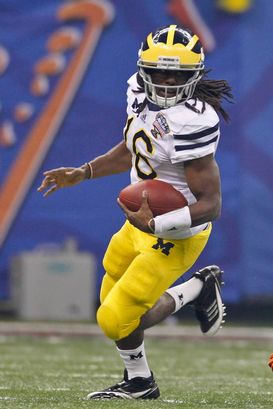 US PRESSWIREMichigan's Denard Robinson believes that he can beat sprinter Usain Bolt in a race.

"I've watched him run, and I'm pretty sure I can beat him in a 40-yard dash," Robinson said at Michigan's media day Sunday. "I'd get a better start, and I could take him.

While it's certainly a stretch to believe that "Shoelace" could seriously challenge Bolt in a race, at least the idea didn't come from the dual-threat Wolverines signal-caller. It came from Devin Gardner, Robinson's backup and the team's newest receiver.

"Denard could [beat Bolt] in a heartbeat — he's the fastest man in the world," Gardner said. "I know what Usain Bolt did in the Olympics, and Denard probably couldn't beat him at 100 meters, but when it comes to football speed at 40 yards, I'd take Denard. He's that fast."

Bolt's gold-medal time in the 100-meter race last week was 9.63. Do you think the Wolverines' Heisman Trophy contender has a shot at dethroning the best in the world?