Former WWE and current TNA legend Ric Flair made an appearance on ESPNEWS Monday and claimed to have sent Green Bay quarterback Aaron Rodgers and his Packers teammates two WWE World Championship belts — one of which was worn by the signal-caller as he was being presented his MVP award. 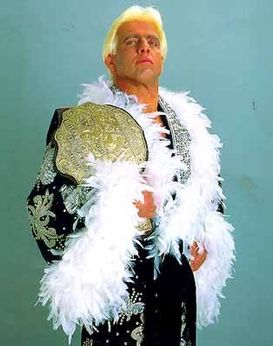 But in a story on the CBS Chicago website, an intern for a local radio show proclaims that he was the one who sent the belt to Rodgers, who won his first Super Bowl on Sunday evening.

Mike Dubajic, an intern for WSCR 670 The Score in Chicago, reportedly bought the belt on WWE.com for $375. Last week, while he was in Dallas, he made sure the belt was sent to Rodgers.

“On Friday I went to the team hotel, and access to get into the hotel was very, very difficult as you’d probably imagine,” he said. “But one of the Packers security guys saw the belt, came over and grabbed it from me; swore to me over and over again that he would give it to Aaron, and he kept his promise.”

Dubajic is sure that Rodgers' belt was the one he gave because it is missing a red diamond gem.

“The belt Aaron Rodgers had definitely came from me,” he said.

So, what happened to the belts the Nature Boy sent in?

Keep in mind that Flair made a career out of stylin' and profilin' — in addition to lyin.'