Don't count out the Sooners just yet

The third official BCS standings for the 2011 season were released on Sunday evening, and Stanford was the big winner this week because of Clemson's loss at Georgia Tech.

The Cardinal jumped two spots to No. 4 in the BCS standings following their triple-overtime win over USC. Not only did David Shaw's squad jump the Tigers, but the Cardinal passed Boise State as well after the Broncos enjoyed a bye week.

Here is the BCS formula — how these rankings came about: Harris Interactive Poll (1/3) + USA Today Coaches’ Poll (1/3) + Computer rankings (1/3). The BCS national championship game at the Louisiana Superdome in New Orleans on Jan. 9 will pit the top two teams in the final BCS standings, which will be released on Dec. 4 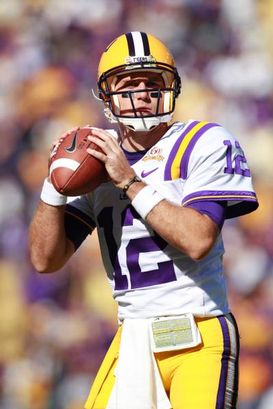 ICONJarrett Lee and the Tigers will go on the road to battle Alabama on Saturday.

• The LSU-Alabama showdown in Tuscaloosa on Saturday will be one of the hottest tickets in college football in a very long time. It will be the first regular-season meeting between SEC teams ranked Nos. 1 and 2 in the BCS. And it will be interesting to see how far the loser falls in the BCS standings, depending on what the teams ranked behind them do in their contests.

• The other huge matchup to look forward to is the Oklahoma-Oklahoma State Bedlam contest on Dec. 3 so long as the Sooners and Cowboys continue to win. Despite OU's shocking home loss to Texas Tech last week, Bob Stoops' squad rebounded in a big win against Kansas State this past weekend on the road, and they are No. 6 in the BCS standings. They are the best-positioned one-loss team.

• Arkansas made a nice move up the standings as well, jumping three spots to No. 7 depsite needing a missed field goal by Vanderbilt to hold on for the win over the Commodores. The Hogs were down 28-17 at one point before coming from behind for the win, and they also played poorly the week before in a 29-24 win at Ole Miss. But Bobby Petrino's squad is still alive.