Dooley on job security: It 'is beyond my control'

Derek Dooley's struggles at Tennessee have continued in his third season in Knoxville, as the Volunteers sit at 3-5 and 0-5 in SEC play. 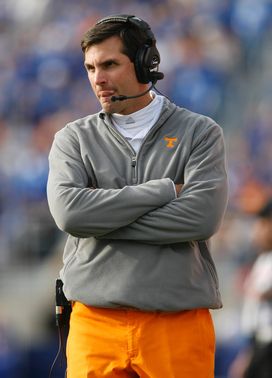 US PRESSWIREDerek Dooley needs to finish the season strong to have a chance to come back in 2013.

The Vols head coach still doesn't have a marquee win on Rocky Top, and his team is currently on a four-game skid as it enters November.

The good news is that Dooley's players are still competing hard for him every Saturday. But in the SEC, that isn't enough for a head coach to keep his job at a major program.

While Jon Gruden is the sexy name to be thrown around in discussions of a possible new face of the Tennessee program, that remains very unlikely. And if Dooley can run the table the rest of the way, he could return for a fourth year after a 7-5 campaign and a bowl berth, putting all hot seat talk to rest despite the fact that new athletic director Dave Hart didn't hire him.

In a recent appearance on Nashville radio station 104.5 The Zone this week, Dooley said the focus remains on finishing the season strong and not on his job status.

"I really do not think about that," Dooley said when asked about his coaching hot seat. "And I mean that. Any of that stuff is beyond my control. All that's going to do is bring a lot of anxiety to me, the team, all that, which is unnecessary. It's so important that we just maintain our focus on what's next and go 1-0, and that's what we're trying to do here."

All of the hot seat talk could be dismissed if Dooley's team finishes 2012 strong, starting with this weekend against Troy. After that contest, the Vols face Missouri, Vanderbilt, and Kentucky, which have a combined SEC record of 3-13.

A 7-5 mark should get Dooley a fourth year. At 6-6, he at least would need to win the bowl game. But would that be enough?