I admit, I have spring fever.

With Duke and Army beginning spring practice on Wednesday, I can’t help but look toward the 2011 season. And I’m sure Blue Devils head coach David Cutcliffe feels the same after a disappointing 2010 campaign.

Let’s take a look at what went right and what went wrong last season in Durham. 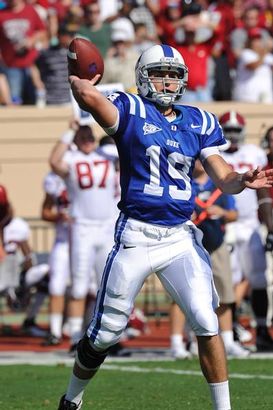 ICONQB Sean Renfree will need to cut down on his 17 interceptions from last season.

QB Sean Renfree: Renfree definitely had his share of ups and downs in his first season as the starter, but he did improve throughout the year. The 6-5, 220-pounder completed 61.4 percent of his passes for 3,131 yards and 14 touchdowns. But his 17 interceptions really crippled the team, as they seemed to come at the worst times. Turnovers, in general, told the story of Duke football in 2010 as the Blue Devils ranked 112th in the country in turnover margin. Still, the passing game was the lone bright spot in an otherwise gloomy season. And the rising junior only tossed three picks in his last six games — with two coming in the finale in a close loss against North Carolina. Again, though, those inopportune picks must decrease.

Vernon leads a strong receiving corps: The team’s offensive MVP was unquestionably receiver Conner Vernon, who led the ACC in pass receptions (73), receptions per game (6.08) and 100-yard receiving games (four). The rising junior’s 73 catches were just one short of the school’s 40-year-old single-season record of 74 set by Wes Chesson in 1970. Three different Duke receivers had more than 400 yards each, and rising senior tight end Cooper Helfet was another safety valve for Renfree. With the signal-caller having a year under his belt, the team’s top receivers returning and four offensive line starters coming back (center Bryan Morgan must be replaced), moving the football through the air shouldn’t be a problem. But what about that rushing attack?

Where’s the ground game?: Duke wasn’t able to establish a consistent rushing attack in 2010. Desmond Scott, who gained 530 yards on 120 carries, had moments of effectiveness but didn’t see a steady number of carries as the Blue Devils relied on the pass so much. Cutcliffe had no problem playing youngsters, as he played six first-year freshmen last year, including running backs Josh Snead and Juwan Thompson and change-of-pace quarterback Brandon Connette. It will be interesting to see how the depth chart in the backfield shakes out at the end of spring and how committed the Blue Devils will be to the ground attack in 2011.

Can the defense stop anyone?: Not only did Duke struggle to run the ball, but stopping the run may have been an even bigger issue. Now, the Blue Devils will have to adjust to losing a defensive coordinator for the second consecutive season, although new DC Jim Knowles coached the team’s safeties last year. Knowles and Marion Hobby, who left to coach Clemson’s defensive line, were co-coordinators last season. Knowles becomes the Blue Devils’ sole coordinator, and the team brought in former Miami assistant Rick Petri to fill Hobby’s spot as defensive line coach. 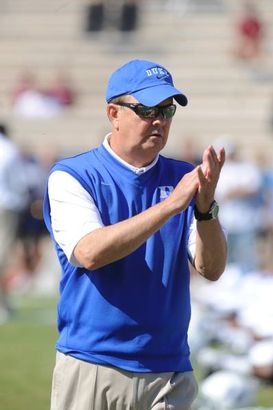 The team’s defensive MVP in 2010 was linebacker Abraham Kromah, who ranked second in the ACC with 129 tackles and also led the Blue Devils with 9.5 tackles for loss. He will be lost to graduation, however, and freshman All-American Kelby Brown is out while recovering from knee surgery. There will be intense competition between Austin Gamble, C.J. France, Tyree Glover and Kevin Rojas for playing time at linebacker.

The defense must also get better at putting pressure on opposing quarterbacks and creating takeaways. While the depth and overall speed on defense is improving, not even a minor bowl bid could be earned unless the unit ranked No. 109 in scoring defense improves.

Win the close games: While the Blue Devils only won three games in 2010, the team lost four contests by six points or less. And the turning point of the season may have been the game early in the year against Army, when they fell 35-21 at home. It set the tone for the rest of the turnover-filled campaign — and erased any shot of going bowling for the first time since 1994.

Entering his fourth season, Cutcliffe must build off of wins over Navy and Virginia. He can win at Duke, and the staff is doing a better job on the recruiting trail. The Blue Devils return 17 starters, but the team’s success in 2011 will depend on limiting turnovers, a more balanced offense and, at the very least, an improved defense.

After opening spring practice on Wednesday, the team will play in the program’s annual Spring Game on Saturday, March 26 at Wallace Wade Stadium.