With spring practices continuing to open up across the country, let's take a look at some of the early enrollee freshmen who may be primed to make an immediate impact on their teams.

RB Mario Pender, Florida State: Pender's presence this spring is even more crucial in light of the arrest of James Wilder Jr., a rising sophomore who was being looked upon to help carry the rushing load for the Seminoles in the fall. The FSU ground game was almost nonexistent last season, so vast improvement is needed if Jimbo Fisher's squad is truly going to make its presence felt once again on the national stage. Pender rushed for over 1,500 yards and 17 touchdowns in his senior season, and he averaged nearly 12 yards per rushing attempt. The speedster carries some baggage, however, as he was arrested last November following a domestic incident with his then-girlfriend. Does he have the maturity to step in right away in Tallahassee?

LB Joe Bolden, Michigan: The Wolverines earned a berth to the Sugar Bowl in head coach Brady Hoke's first season largely because of Greg Mattison's magic touch on the defensive side of the ball. The strength of the 2011 squad was the defensive line, but the departures of Mike Martin and Ryan Van Bergen make it imperative that the Wolverines get instant impact from some of their newcomers. Enter Bolden, who is an east-to-west quick outside 'backer. He does need to put on weight without losing his speed, however, and that will be his main challenge this spring and summer going into fall camp. 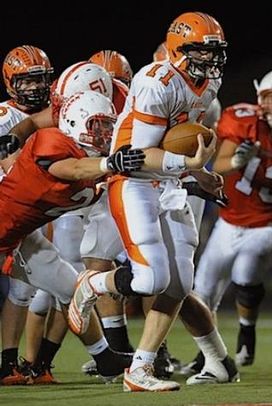 QB Gunner Kiel, Notre Dame: I still think that Everett Golson or Andrew Hendrix will eventually win the starting quarterback job in South Bend, but incumbent Tommy Rees and early enrollee Kiel certainly will get as good of a chance as anyone to be the starting QB. Kiel ran the spread offense in high school, so it's just a matter of him adapting to the new terminology and being mentally prepared because he certainly posseses the talent to win the job.

S Travis Blanks, Clemson: If you saw Clemson's disastrous effort defensively against West Virginia in the Orange Bowl, you know that the secondary needs immediate help. And new defensive coordinator Brent Venables should get some aid in the form of Blanks, who is a capable playmaker. He was an excellent wide receiver in high school, so his ball skills are prevalent along with his ability to lay a licking on the opponent.

OT D.J. Humphries, Florida: There's a possibility that Humphries can start right away for Will Muschamp and the Gators, especially after the team experienced such subpar play along the offensive line last season. Humphries has the quickness to deal with speedy SEC defensive ends and pass-rushing 3-4 linebackers, and he's a mentally mature kid who shouldn't feel too overwhelmed by the transition to big-time college football.

CB Tee Shepard, Notre Dame: The Fighting Irish lost both of their starting cornerbacks, and most of the returnees don't have significant experience. So Shepard will have a chance to win a starting gig if he's able to pick up Bob Diaco's defense. He is one of the most talented corners in the Class of 2012, so he could really help the Irish maintain the solid play of their emerging defense.

WR Trey Metoyer, Oklahoma: Quarterback Landry Jones looked lost last season when star receiver Ryan Broyles went down with injury. With Broyles moving onto the next level, the veteran Sooners signal-caller will need to permanently adjust to life without his clutch receiver. So Metoyer, a former five-star recruit from Chatham (Va.) Hargrave Military Academy, could emerge as a top option. He signed with OU last year but didn’t qualify. Now, he could be the playmaker on the outside that this offense needs because he possesses the explosiveness to get down the field.

QB Connor Brewer, Texas: The pro-style passer is a longshot to beat out David Ash and Case McCoy for the starting quarterback job in Austin, but head coach Mack Brown and offensive coordinator Bryan Harsin will at least make sure the three-time Arizona state champ is ready to play if they are not getting production under center from Ash and McCoy.

DE Arik Armstead, Oregon: Chip Kelly finally landed his standout defender on the recruiting trail, so it will be interesting to see if Armstead could make an immediate impact in Nick Aliotti's defense.

RB T.J. Yeldon, Alabama: Eddie Lacy will likely get the majority of the carries with Trent Richardson moving on to the NFL, but Alabama's 2011 Mr. Football will get a chance to receive some carries because Nick Saban likes to spread the wealth.